Seeing as Harrison & I have lots of afternoon time to use now that he’s not napping, we’ve been looking for other activities we can do that don’t involve the TV and are relatively quiet (in hopes that Little Girl can at least get a good nap every day!). I’ve been finding lots of ideas on Pinterest and in the last couple of weeks I’ve made a run to Hobby Lobby, Target, Walmart and one of the dollar stores to look for fun, easy, cheap, and quiet crafts. One simple project we stumbled upon that has become quite popular is what we like to call Letter Art. Here is what it looks like in action: 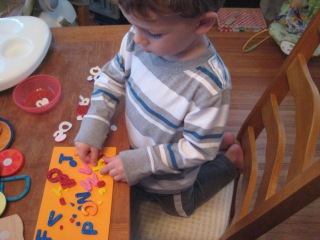 To make our Letter Art, I got simple, colored sheets of foam “paper” and a big bag of foam (& glitter!) letters. 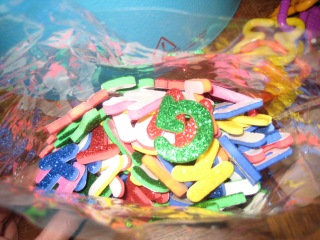 Normally I suppose people use these letters for making kids’ names on visors and other items at camps, etc., but we decided they could be used like any other sticker. At first I poured a bunch into a bowl for Harrison and thought I would be there to be the backer-remover, but I quickly learned that he’s got pretty good fine motor skills because he can get most of them off by himself.  In fact, peeling the sticker backs off seems to be half the fun sometimes when we start making Letter Art. Hey – whatever works! 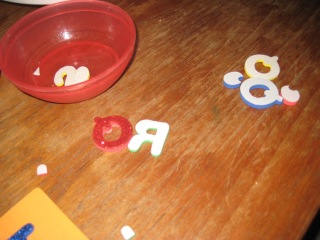 The other thing I learned is that Harrison’s obsessed with the “centers” that can be found in your obvious letters like “O” and “D” but also, oddly enough, in the “S” and “W” as well. He loves to punch out these pieces, so he quickly searches through the bowl each time we do this to find all of them. He likes them so much that he usually tries to get me to pull out the big bag again as soon as he’s done collecting centers because he’s ready for more. I’ve done this a couple of times, but I’ll need to start pacing myself or he’s going to be bummed that absolutely no centers are left!

Once he starts peeling off backs, it is a free for all; he places the stickers wherever he likes on the sheet. A finished product might look something like this (notice the centers!): 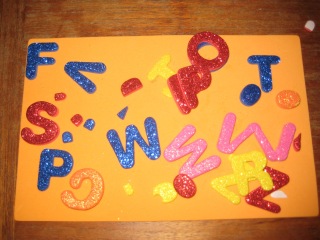 What I love about this simple art project, though, is that we’ve also been able to incorporate some letter recognition and word association practice into the fun of stickers and glitter and centers. I’ve started to ask him what letter he is holding and a lot of the time, he can tell me (and not just “Z” which happens to be his favorite letter). I also ask him if he can think of any words that start with that letter and if he can’t, I give him some ideas in hopes that the next time I ask, he might remember that “W” is for “Welsch” and so on. The other cool thing about this is how HD has turned it into a matching/sorting exercise. See how the pink and blue “W”s are together on the sheet? And notice that there are two red “P”s stacked on top of each other? That’s his doing. He’s finding ways to group the letters, all on his own.

I don’t know how long his love affair with Letter Art will last, but for now, when I ask if he wants to do some, he yells, “YEAHHHHHHH!” and comes running. Can’t beat that! And, since I can’t just sit there and twiddle my thumbs, I get to play and have fun too (Harrison added the “O”and the center as helpful afterthoughts to my masterpiece): 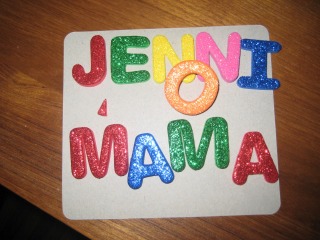