I blame Pinterest for my latest demise as a parent. If it weren’t for Pinterest, I would have no idea what a sensory bin/box/tote is and would have never dabbled in such. Harrison would have just had to wait until he was big enough for preschool and could go to town “sensing” in some place other than my living room. But, seeing as I was hoping to put Pinterest to use beyond wasting my precious free time, I tried to be a fun, care-free, no-I-don’t-mind-if-you-throw-crap-all-over-the-place mom, not once but three times. Here’s how they went:

The first time Harrison and I made a sensory bin, it looked like this. Simple and easy enough, we just collected various nature items (sticks, rocks, leaves, feathers, etc.) during a walk to the park and then tossed them all together in a diaper box when we got home. I kept him and the box of goodies contained on the sun porch and he had a grand time dumping out the whole collection. Pretty sure he managed to shake loose every last piece of dirt that was clinging to the roots of the grass clod we collected, so he is thorough to say the least! After a couple days of dragging this box around (and after Mama secretly weeded – ha, punny – select messy items out of the box at night), he lost a bit of interest.

Our second sensory bin was very much Pinterest inspired. I took the time to dye rice with food coloring and rubbing alcohol and then arranged it all pretty-like in a plastic bin to look like this: 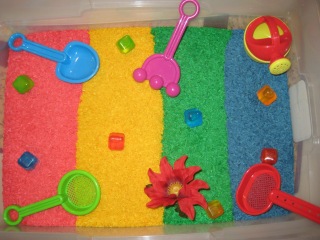 Add in the little sand toys, a fake flower, and some plastic ice cube thingies, and he really had a great time playing the first time I unveiled it. As in, for 20 minutes, he was captivated with the digging and mixing and “hiding” game that we developed using the ice cube thingies. Then the rice hit the floor, literally. A few grains had already made it there of course, and while this was expected, grabbing handfuls and dumping them really wasn’t. Why? I have no idea. I clearly wasn’t thinking. Before things got too out of hand (and the dogs ate too many pieces of rainbow rice), I got it picked up and packed away.

A day or two later, HD started asking for his rainbow box again. He wanted to play! This was fine and I decided to try a spot away from dogs and baby that I thought would be more welcoming of The Mess that I knew was coming. What I knew was coming was rice-on-the-floor. Where I chose was our entryway. What ensued was this:

Notice the joy on his face? Well, I do now, but at the time, I stood there in a bit of shock; this is not what I had in mind when “allowing” mess making! & notice the railing to the right of the picture? That railing is to our front stairs where I am still – a monthish later – finding dyed pieces of rice in nooks and crannies. It wouldn’t have been so bad, but then he flat out refused to help clean up (and thwarted my attempts to do so by grabbing the bin to dump it again), so Rainbow Rice, once I finally got some of it back in the box, went away. Not in the trash – just in the basement, where it sits waiting for a nice day when we can take it outside and Harrison can have a grand old time dumping it out for the last time. Note – I should probably do some research to make sure I’m not going to poison any birds, etc. that might try to clean up this pending mess for us!

So. Lessons learned. No dirt. No rice. Okay.

My third attempt came this morning with a Red box that I made for him of various items I picked up here, there, and around the house. Only now do I realize it didn’t include anything Husker – the shame!

I thought all of my items were big enough to not be as annoying (to me) as the rice. I thought wrong! Harrison was instantly attracted to this new bin and was curious to find out what I had put in the two boxes (bells in one, beans in the other). He had a great time with the bells, sorting and shaking them. The beans were fun for scooping, and then, yes, dumping. I did my best to remain stoic and be at peace with how he was dismantling the box. Red crumple paper all removed from the box? Fine! Entire contents of bean box turned over on the floor? Great! Look at me – I’m in-control-of-my-extreme-dislike-of-messes-and-am-one-great-mom, I tried to tell myself. Seeing as my son seems to thrive on them, I really tried to let him just make a mess. But a type-A girl like me can only take so much. So much looks a bit like this: 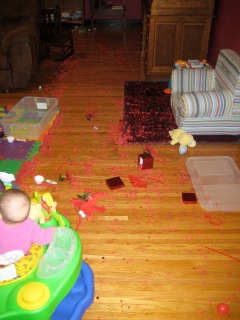 When the objective went from playing and making a mess while doing so to just flat out get this stuff everywhere, I lost it. Well, I didn’t lose it. I just started picking it up and putting it back in the box. I lost it when, again, he went after my minimal cleaning progress, dumping the bin again and again. *Sigh* So much for the fun morning activity!

Believe it or not, I got all of this cleaned up (because, you know, I love to clean, especially messes that shouldn’t have been there). & this box is, like its rainbow predecessor, has been put away for good.

This time I really learned my lesson. I am not carefree enough for sensory bin mayhem; that crap can be saved for Daddy or preschool!

P.S. For any MOPS friends who are reading this and saw my little blurb in this month’s Maternal Journal about the “great fun” and “excitement” of sensory bins, you can consider this a follow up article called, “Good Bins Gone Bad!” 🙂

One thought on “Seeing Red”