You see, here is my Yellow/Poppy Mug. 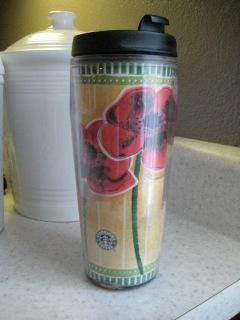 If you have ever taken a class with me, or taught with me, or been around me when I am in Teacher Mode, you might recognize it. It’s pretty much been my right hand in the classroom ever since I started out as a Teaching Assistant at UNL, but it actually dates back even longer than that.

I got my mug my junior year of college while visiting with my aunt, Tammy, and her husband, Tom, who were then living in New Jersey. For my 21st birthday present, I got to go stay with them and we spent time in New York City doing all kinds of awesome things (Um, Aida? On Broadway?! Hello, Wonderful!). One random stop we made, however, was in some little Starbucks in the middle of I don’t know where in NYC, and I picked up this mug. Tammy got it for me as a little extra present, even though I was not a coffee drinker at the time. For years it only saw use for water (and occasionally for tea or hot chocolate). I loved it!

For various reasons (OK, one – my complexion), I don’t wear yellow. That doesn’t mean that I don’t like the color, though, so I sometimes go looking for ways to incorporate it in my world. This mug became my sunshine and honestly, there have been days when drinking from a yellow cup was enough to make me smile. It didn’t hurt that I also love red, and the big poppy flowers on the thing just worked for me.

All was well until one fateful morning in 2005 (or possibly 2006) when I was cruising down the hallway of Andrews Hall (where almost all English classes are taught at UNL) and I dropped my mug on the hard tile floor, chipping the bottom of it. Ugh. I could have cried right there. But fortunately I didn’t break-break it. It really was just a chip. & I quickly learned that if I didn’t submerge it when I washed it, everything was fine. This arrangement went on for years. Seven years (or possibly six), actually.

I am a huge water nut, and I always like to have some with me when I teach, so this mug went with me right after grad school to my first job teaching English at Central Community College. It then went with me when I switched to teaching 7-12 English in Palmer, NE in 2008. And in 2010, it started going back to CCC when I began teaching as an adjunct, one night class per semester.

Until just this summer, I’ve always used the mug as a sort of joke with my students. By way of introducing myself, I usually asked them early on in a course what they think I had in it. Of course most guessed coffee. But I used to hate coffee, so I would smile and assure them that nope, just water (Gee, I am so funny, aren’t I?). Well, now that I have two small kiddos, quite frankly, coffee has become one of my best friends, so yes, this week, as I began teaching my first summer class of the year, I poured coffee in my mug (and took another one of water).

And this is precisely where my problem arose. My beloved Keurig doesn’t fit my travel mug, so I have had to brew my coffee into an actual coffee cup and then dump it in Yellow/Poppy. After three days of doing this, I noticed tonight that there is now condensation inside on the paper lining of the mug’s upper rim. Apparently there were cracks there that my less-than-graceful-coffee-pouring found that I used to miss when just pouring water in it.

I really don’t need anything to start growing on it, so now I’m afraid I have to say goodbye. I can’t believe I am this attached to silly mug from Starbucks, but I went to toss it in the trash tonight and realized that first I had to memorialize it. So here you have it – my Yellow/Poppy Lament.

Now. Where to find a replacement? Carrying my Dixie travel/hot cup thingies just won’t cut it for long!