How far we’ve come in just one week! I can’t believe it is even possible to have this much improvement in such a short amount of time. Really, I thought with Raegan being as active and alert as she is that this whole process would take at least three weeks. At least! But just over one week in the books and she’s a whole new sleeper. Amazing.

I’ve been keeping a really good log of her progress. You can see it here, if you like, but it’s pretty long and not written to be terribly entertaining or interesting. I’ve been keeping it for my own purposes (but not editing at all) and will continue to update it. So if you are curious about the nuts and bolts (or are thinking about trying this with your own kids), feel free to read about the details of Raegan’s Sleep Shuffle. For those of you who might like the condensed version, I thought I’d write a little highlights report…

Setting up a sleep routine – finally – has been the biggest helping factor for Raegan. It’s such a simple thing to do; I can’t believe I hadn’t already done it with her. But now that we’ve learned the error of our ways, we have a great little system in place. After a diaper change, I still nurse her but I leave the lights on and I talk to her, especially if I think she’s looking drowsy before she’s done eating. Then we turn on her fan for white noise, get her in a lovely sleep sack, and read two-three books with Love Bug (more on her in a minute) in our laps. After that, it’s lights out and I turn her so she and Love Bug are nestled on my right shoulder. I rock and sing through a lullaby twice (usually “Twinkle, Twinkle” or “You Are My Sunshine” – lately she has started joining in when I start by going, “Dlab bob dob bob” or something along those lines) while I rub her back (by the way, this is my new favorite part of the day…she is so heavy and snugly when she is sleepy; she just rests so peacefully on me during these moments and it makes my heart smile every time). After kisses and putting her down, I make sure Love Bug is by her side and I leave.

At nap, the leaving has become so helpful. The last couple of days she hasn’t made a peep and stays in there for at least an hour and a half both times. I tried sitting with her at nap to keep her calm but my presence seemed to have the opposite effect, so I decided to change it up and just walk out and only go back in if she really seemed to need me. She protested during the first few days of this, but never so much that she was distraught. And now it seems to be exactly what she wants. Love it! 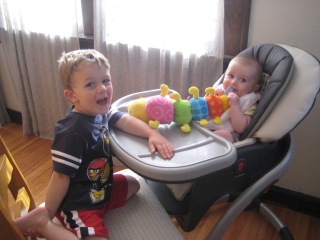 Here she is shown with Raegan at 3 months and 7 months. It is appropriate that HD is in one of these pictures as well because technically, I bought this caterpillar for him when he was little. Shhhhh! Don’t tell his sister!!! He never really took to it so it was pretty much like brand new, anyway, and when I found it in a tote of baby toys, I thought, “Great! Raegan can have it!” And while I wouldn’t say there was an immediate connection, Love Bug is growing on her. The whole Sleep Lady thing suggests having a lovey, and as we know, stuffed animals sure have helped Harrison, so I picked Love Bug as Raegan’s first stuffed animal friend. Should she want to choose differently some day, so be it. For now, though, Love Bug is working well.

As for nighttime, we’ve had some major success there as well. Twice Raegan has slept for 11.5 hours (actually 12, one night!) without making a single sound. OK, she did make a peep at 9:00 last night, but whatever – she’s still a rock star! Considering that this is the girl who would wake up every 2-3 hours all night long every night and need to be nursed or rocked or shushed or all of the above (and all of this was still happening up until a week and a half ago) is a-maz-ing. Apparently she was as ready for more independent sleep as the rest of us!

Our biggest challenge, by far, has been the night wakings. Because she was so accustomed to waking all the time and always being put back down while nursing, learning to put herself back to sleep has proven to be far more difficult than putting herself to sleep in the first place. We’ve tried, as the book suggests, to go back to our designated Shuffle spot (we move the chair every three days, which means by now, because her room is so small, we’re already out in the hallway!) and comfort her from there with quiet noises/shushing so she knows she isn’t alone. Really? It seems to piss her off more than help her. We still are trying to do it, but a lot of nights have found Ben or I in that darn chair for an hour or more to no avail; we eventually go back to bed and she eventually puts herself back to sleep. I hide my head under my pillow a lot. Not sure if we’re doing this part “right” or how it is much different from cry-it-out, but she’s got to learn and we’ve got to give her the space to do it; looking at how well and how quickly she’s adjusted to the nap/pre-bed stuff tells me that for sure.

Even though I know it would be a quick fix for those middle of the night cry sessions, I’m pretty relieved to no longer be nursing her to sleep all the time. I was nervous about cutting out all those night feedings, but clearly I know she’s not starving. If anything, she’s nursing more efficiently now when I do sit down with her, AND she’s doing better with her solids, too. Really, all I can see are positives here, so I am so glad that I dusted off that book and gave it another shot.

While I wish I could say that all of this better sleep for Raegan has meant better sleep for me (and Ben), that has yet to be the case. Poor Harrison. Potty training and Daddy going back to school have really thrown him for a loop and now he’s the one getting up two or three times a night. *Sigh*. I mean, *Deep Breath*. We will get there. And maybe it will even happen before the kids are in middle school!