Wow. Sometimes, when you’re 26, a friend suggests an idea in passing and you think, “That’s cute. I should do that.” For me, that idea was taking weekly photos of my then first-time-growing-baby-belly. Each Sunday I put on the same clothes, stood in the same spot, and had Ben take a picture of my ever-protruding stomach. Then, I posted each picture to an album on facebook, creating a flipbook of sorts, of my pregnancy.

My poor mother. She was appalled at first, that I was baring my midriff online like that. But then she, like some others, sort of got hooked on the whole thing. I have to admit; I couldn’t wait for Sundays when we could take the photo and post it for folks to see the changes. Many of you followed along, posting encouraging comments that helped me adjust to the (many) changes of my pregnant body.

When it was all said and done, and Baby Boy Harrison joined us 12 days before his due date, I took a final picture for the album with him in front of my belly. It was just perfect, really. 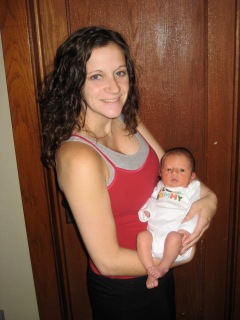 Then, 18ish months later, when I was just about to turn 29, I got pregnant for the second time. Of course, one of my first thoughts was, “We have to do the Belly Watch again!” I’m sure that if the first round didn’t make some people think, “What is she doing?!”, the second one did. Did you all really need to see my ever-growing (and growing even faster) belly every week? Well, no; I know that. But I also knew some of you would get a kick out of it, so I got a new top to wear in my weekly photos, pulled out the black pants again, and started down the road of Baby Welsch Belly Watch Round Two. I wondered, throughout the course of my pregnancy, how many people were trying to compare the size/height/etc. of my bumps between the two albums like I was. I have to say, though, that the thrill was gone some weeks when I realized that taking the photo meant I would actually have to shower and look semi-presentable that day instead of just vegging around the house with my boys.

This time, Baby Girl Raegan decided to take her sweet arse time on arriving, so the Belly Watch continued right up until my due date. Then, five days later, she was finally born and I was able to post the next (and final) week’s photo with my adorable little peanut. Again, perfect.

Now I’m 30. I’ve had two children. Somehow this whole show your tummy thing sounds a little less appealing than it did four years ago. But, because I’m an equal opportunity mama, I’m going to do it again.

Baby Welsch Belly Watch – Round Three? Well, I’ at 9 weeks right now and already have a little pooch going (which is quite normal, I would imagine, with Baby No.3 and no abs after No.2), but we’ll wait until the traditional 12 Week mark. That gives me a few more weeks to find a new top and new spot for the photos since we no longer live in our little house. Good thing, eh?!