While I still need to write about our holiday travel adventures, it has been our homecoming the last two days that is on my mind currently. In short, our trip was pretty darn successful, but the reality since returning to Hastings late Wednesday night is that it also took a lot out of all of us.

Although I was only sick on Christmas morning while we were gone, the last 36 hours have been interesting. I went 25+ hours without being able to keep down any food or drink, but again, it was just morning sickness, not the flu. I was on the couch essentially all of yesterday, last night, and then to start this morning. Then, miraculously, some cereal and some Gatoraid stayed in my system. I felt much less like a zombie as the day continued, but still wasn’t good for anything besides being on the couch (the 10 minutes it took to make myself some Ramen this afternoon about did me in). While I’m doing a little better tonight, my head is still pounding and I’m definitely doing bedtime early tonight.

Thank Goodness Ben is home on Christmas Break right now because I would have been lost without him the last couple days. He’s had to do everything for the kids and around the house because I’ve been so out of it. And speaking of the kids, they too are pretty well worn after our excursion. Raegan went in to the doctor this afternoon because of a nasty, persistent cough and while we’re happy to learn she doesn’t have strep, RSV, or the flu, she is still on an antibiotic for five days and nebulizer treatments until her cough improves.

And Harrison? Well, I thought he was doing perfectly fine, but then this happened: 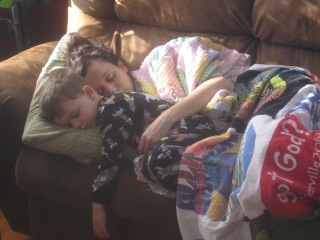 I was resting while Ben started lunch early with RL; HD was just sort of circling around the house, saying his tummy didn’t feel good. Ben told him he could sit with them at the table or go join Mama on the couch. So just like that, he came over, crawled up next to me, put his head on the pillow, and fell asleep. At 11:35 a.m.! The child who has never volunteered for a nap in his life, came and snuggled up with me on the couch and then stayed that way for 1 hour and 40 minutes! Part way in, we shifted and spent the rest of the time like this: 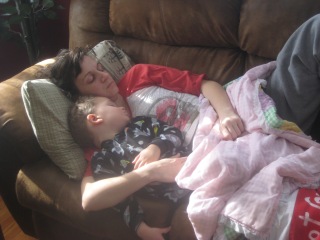 I didn’t get much actual sleeping in, but did doze a little. For the most part I laid there thinking about my babies and my belly and my sweet, sweet boy, sleeping in my arms. I’ve never napped with my kids and today made me realize I’ve missed out a little because it is so peaceful (not to mention, warm).

But, wonderful as the nap was, I should have known something was amiss. Not long after HD got up, he got sick. And then got sick again an hour or so later. He wouldn’t drink or eat anything, either. No fever, though, so we don’t really know what’s going on. The other crazy part? He’s already in bed for the night – well before 7 p.m. which never happens if he happens to catch a nap during the day. So I’m hoping the sleep does his body some serious good (and the same for the rest of us, too), because clearly we all need a little recovery right now!