Yesterday afternoon, I was sitting in one of my many rocking chairs, holding Lincoln and thinking, “I wish I could just stay like this forever.” But then I thought of the 1,000,001 things I’d like to organize or clean in my house and I thought, “I’d love to split myself in two and be able to do both at the same time. That would be perfect.” Of course, right after that I remembered that I have two older, totally adorable and worthy-of-spending-time-and-snuggles-with children AND a kind husband and thought, “Crap. More splits.” And then I remembered what it was like BC (before children) when I had Saturdays to do whatever I darn well pleased and thought, “Yep, I’m pretty cool, too. It’d be nice to have a self just for myself.” All of this, added to the fact, which you already know, that I’m an English major and bookworm of course had me thinking next that I needed horcruxes. If you don’t know HP, I’m sorry for the strange reference, and if you do know HP, I’m sorry for the strange reference because I’m sure you are thinking it odd that I am comparing motherhood to soul splitting. I sure thought it was odd, and what I realized about ten seconds after the horcrux line of thought was that what I really need is probably just more sleep, but the more I think about it, splitting oneself and being a mama aren’t really that different. Just hear me out…

In the last month, my heart and my body have been put to the test as we’ve welcomed our newest little person to our family. For the vast majority of that month, we’ve been great. My body aches some days because we’ve been sleep-deprived at times, you bet, but overall it’s been a pretty smooth transition. I attribute much of that to summer vacation and the fact that Ben and I make one heck of a team. We have taken this family growth business on as a united front and what a difference that makes, even when you go in knowing you are out-numbered by the littles all driving their own buses (an expression my dad has always used – accurately! – to describe the reality of life with small children). Even on the days after nights when I don’t sleep well (like the last few nights – oof.), I know I’ll be OK because I have Ben’s help to get through all the nursing sessions and meals and play time and chores each new day brings.

But change is hard, maybe even impossible, I think, without some growing pains, so of course there have been tears (both mine and the children’s) and tantrums (both mine and the children’s!) along the way. It takes time to get to know each other again after you add a new person to your family, so as a result, my heart has been growing and stretching like crazy since 6:45 p.m. on July 4th. At times it aches for the reasons mentioned above – so many different desires and people needing attention, all pulling me at once. And at other times, my heart has been fit to burst with joy because I stop to think about how we have been so blessed by the care (and food! and time!) of friends and family, not to mention just how amazing it is to have three healthy and (relatively) happy little babies in our house.

I’m still not sure that The Reality of Three has sunk in yet, but here’s what I have learned about Mr. Lincoln: he is a love. SUCH a love. He’s been my smushy face, sweet boy, curled up in a ball on my chest or in my arms little snuggler from day one and if I could, I probably would hold him all day. As noted by others who have held him, he’s also a strong little wiggler who will do a back dive off your shoulder if you don’t use two hands to hold him up there. He’s a handsy guy which he can get away with because he’s a month old, but even (especially!) his Mama is looking forward to correcting such behavior because, quite honestly, it is hard to nurse the Little Dude when his hands are constantly flying in the way! He gets away with this, however, because, again, he is so darn sweet. “SO sweet!” is what we hear from others, including strangers, whenever they see him.

And it’s true. He may have been born on the Fourth of July, but Lincoln is no firecracker. He’s actually pretty chill and seems to be ready to just roll with it, which is great (and which also makes him a good listener because that is exactly what I lectured him about when he was in my belly!). Even when you think he’s going to wind up and squawk like a banshee, he calms down just as quickly and drifts back to dreamland (knock on wood that this continues!). Perhaps, when you are the third baby in a house full of busy babies, you need to let out the occasional squawk just to remind everyone you’re there?? But really. Just look at those beautiful dark blue eyes. How could we ever forget he is a part of us? 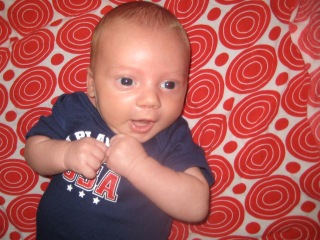 Which brings be me back to splitting. All of these people, these pieces, are me. I’ve already been split by the arrival of each of them, including Ben, but not one has been a split that divides. What’s that quote about true love only multiplies, not divides? What a Truth that is. My body, my heart, my soul, and my life have all expanded with each new addition, for which I’ll be forever grateful. [Granted, I may lose my dang mind in the weeks to come when Ben goes back to school, but at the center of it all, the blessings and gratitude will remain, as I know my friends and family will help me remember!] So perhaps the literary comparison I need to make here is not to HP but the Grinch instead. One month ago, today, my heart grew ten sizes, all thanks to Lincoln, and what a gift he has continued to be ever since.

The others seem to agree: