Here is what I got when I asked Harrison this afternoon to show me his proud smile: 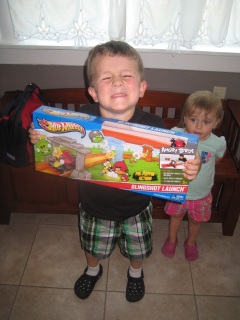 And what is making him so proud? Why, he’s holding it, of course! It’s his brand new “Angry Birds Race” (as he has been calling it for the last month-ish).

So let me give you the back story to this proud, proud moment in a four-year-old’s life. A month-ish ago we were in Herberger’s looking for some new shirts for Ben. Harrison, naturally, found the small toy section of the store and was immediately drawn to the display of Angry Birds model games. He has several of these sets and loves building and playing with them. While he’s not a big car person, he does like to play with an old set of Hot Wheels at Grandma and Grandpa Welsch’s, so perhaps that was what led him to this particular set. When we left the store 15 minutes later without it, he was a wee bit bummed. But then I had a wee bit of an epiphany and decided that, with our powers combined (somebody please tell me you get this reference. Please!), we could both get something we wanted with a little time, a little patience, and a little practice.

What kind of practice? Handwriting. Well, not so much even handwriting. I know the kid is four, after all, and has two years of preschool left, so I’m pretty certain that his handwriting will be much improved before he starts Kindergarten. But at both of our conferences with his teacher last year, fine motor strength, or the lack thereof, was mentioned and we really didn’t do much to work on it. I got some games and activities that might help strengthen his hand muscles like KerPlunk and latching puzzles, but we did not touch his grip on a writing utensil until, well, about a month-ish ago!

I thought that making an incentive chart that got Harrison practicing his grip might be a nice way to get us through the last month of summer and also get him ready-ish for school starting. I made him a way-super-cool-and-colorful chart to hang on our fridge and had Angry Bird stickers at the ready for each day he met his goal. It looked like this:

See how I tried to be all fancy pants about it? After the first two weeks, I upped the ante and increased the number of minutes he should do in a day. But I said he only needed five out of seven days of each week because I knew, even before we started, that there was no way we were going to accomplish this every single day for an entire month. What I learned after the first two weeks, in which he did an amazing 12 days in a row(!), was that there was no need to increase the time. 10 minutes a day was good enough because I did not want to make this a punishment or unpleasant task. I wanted it to be very positive and very success-oriented. So we let go of the “handwriting” idea and focused instead on letter tracing and grip on the pen/marker/highlighter/crayon/ paint brush (you get the idea). It quickly became all about holding with his finger tips and not a tight fist, and so long as he did that, he got to earn his sticker for the day. Here is Day One of practicing with words of his choice:

And the sticker placement:

Some days looked more like this (and I was totally OK w/ that):

And here is what the chart looked like this morning: 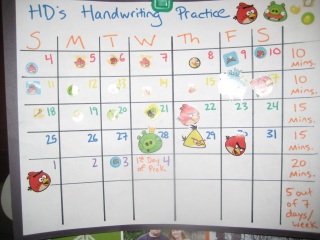 All done! Or done enough, at least. We lost a few days there in Weeks Three and Four because of HD’s adverse reaction to a bug bite that left him in an ACE bandage for three days and on an allergy medicine and antibiotic for ten. One is not so concerned about grip practice when one’s writing hand looks like this: 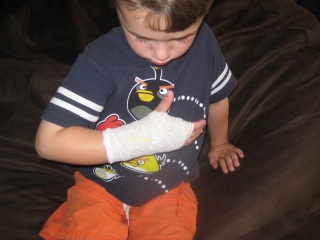 And while I am super, super proud of how long Harrison dedicated himself to his mission, I find myself feeling like a bit of a Type A Arse for making him do this. Especially after I read this insightful blog last night. She’s right; 4-year-olds need to know how much they mean to us, not how to hold a pencil correctly. What I will take away from it all, though, is the excitement, the pride (“I am so proud of myself, Mama!”), and the pure joy he had this afternoon when we finally got home with his new game. He certainly earned it!