We love our local Children’s Museum somethin’ fierce. We may go in spurts between visits, but since we first joined three-ish years ago, we have love love LOVED being able to take our kids there to play, hang out with friends, or participate in the various programs it offers. And by “it” I totally mean Miss Deb, the director.

As soon as wee-little Harrison realized that Miss Deb at “The Museum” knew his name (and it never takes her long to learn the little one’s names), he was hooked. I could get him to do pretty much anything (like get in his car seat or pick up the toys he’d been playing with at The Museum, etc.) if I just so much as mentioned her name. “Harrison, Miss Deb is waiting for us. You’d better get in your seat!” “Hey, Buddy. Let’s help Miss Deb and pick up these toys” and viola – it would happen! And really, that same admiration has continued ever since because Miss Deb has continued to be there for our kids, to ask them questions, and see how they’re doing whenever she sees them. It’s awesome (and again, by “it”, you know who I mean).

One of the programs that we did with Harrison was the Young at Art Toddler Time, starting the fall after he turned two. For three weeks of most months of the school year, a Tuesday morning art class is offered that includes stories and songs, and dances or games and, of course, art. Although Harrison’s never been a huge fan of coloring (he does OK with painting), he always seemed to enjoy these classes. We didn’t get to do too many of them, though, because Baby Sister came along and life got crazy and well, you know the rest.

Flash forward to this fall when Baby Sister is about to turn two. I got Deb’s email about the September art class and thought, “Excellent! Raegan would love that!” But what to do with HD? He’s not at preschool on Tuesdays, and I didn’t think he would just hang out by himself in The Museum while she was doing class (and Lincoln was hopefully sleeping in his stroller or on me in the Moby). But never fear – Miss Deb had the answer! He could join the class, too. I was done and done; we signed up immediately!

Last week was our first go at art class, and as you may remember, we had a rather chaotic morning. I almost thought about scraping class for the day and just starting this week, but then we tossed everyone in the van and I got them there just on time (OK, maybe a little late, but such is life). And I am sooooooo glad we made the effort.

Harrison was fantastic. For a kid who had just put a small hole in his head, he did amazing. He lead his sister to the mat for songs and games. He encouraged her to sing and wave and made sure she got a colored shape during the activity. When it was time to get their art on, he lead her to a table and made sure she was next to him. And the whole dang thing just melted my heart. He has always been a fan of his baby sister, just as they both are of their new baby brother, but seeing their bond in action was breathtaking.

This Tuesday we had our second round of class and again, Harrison was there to make sure his Raegs had a place to sit on the rug and a spot to work at the art table. Whereas last week she seemed a little unsure of what was going on, it was obvious she felt more comfortable this time (based on her wiggles and grins) and I know I have her brother to thank for that. I am also so thankful we have an outlet here in town like The Museum where my kids can let their creativity shine and be encouraged by someone like Miss Deb.

Life with three is as crazy as I could have imagined and often it feels like my mind is going three (or more) directions at once, but obviously I’ve got a great helper in Harrison and his great big heart.

Plus, he and his sister are pretty rad little artists: 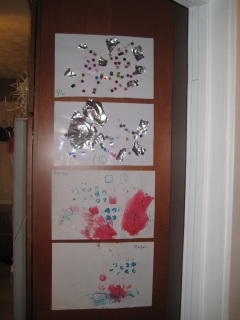 (OK, so maybe Mama helped a wee little bit with RL’s Rainbow Fish creation, but she was running the glitter glue, I swear.)