Normally, I don’t go a week+ without writing. And normally I don’t take an entire week of a new month to log a post on my blog. But – thank God – normally we also don’t have five out of seven days in one week where a new family member comes down with the flu, which is what our last Friday-Friday looked like.

If you’ve been following along with the Facebook photos, you’ve seen these already, but here’s the illustrated tale of How June Kicked the Welschies’ Bums:

I started the flu right as I was getting ready for bed last Friday night. Talk about poor timing. After two nights of almost non-existent sleep Wednesday and Thursday, I was soooo tired Friday. But instead of sleeping, I spent the next 5+ hours running to the bathroom. Awful. And it left me zombified all of Saturday and only partially functional Sunday. Did I mention that I started teaching my summer class at CCC on Monday? So in addition to recovering from the flu, I was trying to get ready to jump into full-time teaching mode. Summer classes are awesome (I usually get some really dedicated students and the time frame is short – three weeks), but the time frame is short and therefore very intense (each day = a week in a normal semester, minus the extra time in between classes for turn-around and response). Again, poor timing. Miss Raegan looks super sad in this photo because she was battling a head cold which she shared with me to make my flu recovery extra special. 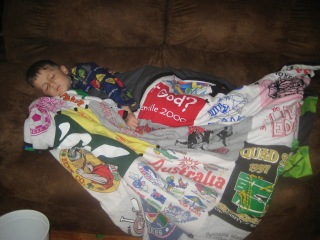 Flash forward to Tuesday. In that awesome way that germs do, we had just enough peace between my illness and the rest of the family getting it that I was lulled into thinking we were in the clear. Ha. HA. HA! Bwahahahaha! (that would be the universe laughing at me, by the way). Oh, no. Not clear at all. Rather, Harrison woke up early-mid-morning Tuesday with the icks and spent the next six hours (we saw a real trend with the whole just six-hour thing, thankfully, but wow, what a six hours it could be) miserable. And then he took a nap in the middle of the day which you know never happens unless the kid is Sick. Thank goodness he made such a quick recovery though and never spiked any big fevers; he was able to go back to VBS with his buddies and enjoy the rest of his week.

Technically, Lincoln didn’t even wait 24 hours to start his bout with the tummy bug after Harrison fell victim Tuesday morning. LT woke up from his afternoon nap Tuesday covered in mess and I had to call the doctor’s office because I have never had one so little with the flu and had no idea what to do. Also, technically, Lincoln’s bout lasted longer but had less frequency than the rest of us, so it continued to be challenging to know quite what to do with him. I stayed home from campus Wednesday morning which was also a bit of a circus, but so it goes with a sick babe. His thankfully came Wednesday afternoon when he woke up clean and dry from his nap and we knew we were in the clear with him. 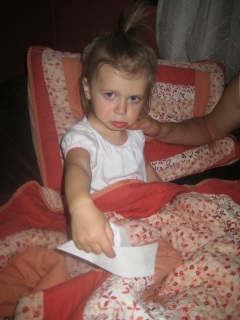 Flash forward again, this time to Thursday. I had a friend come over to visit after the kids went to bed and we were having a lovely time/chat when all of the sudden, about 35 minutes after the kids went upstairs, we could hear this awful sobbing, crying coming from RL upstairs. Ben went to check on her and sure enough, it was her turn to take a turn for the worse. We relocated her to the bean bag in the living room where she and Ben stayed for, you guessed it, the next six hours. Like her mama, Raegan has had the hardest time recovering because her flu messed with her sleep the most. Two days later and she’s still dragging a bit.
Of course that leaves Ben as our final victim of the June Bug but I don’t have any pictures of him; he thought I was nuts to keep taking/posting pictures of sick kids all week so I didn’t bother him with the camera when he started feeling awful yesterday afternoon. His thankfully came in that his duration/frequency was the least of all of us and I was beyond thankful that he waited until Friday afternoon because then at least I was done teaching for the week.
So, yes. On top of my status of Working Woman and trying to cram in as much yoga training as possible before teacher training comes in July, it has been what we’ll call a “Helluva Week” here. No wonder I haven’t been blogging!