In case you were wondering if coming home from a marathon weekend yoga extravaganza makes a person all Zen and awesomesauce, let me tell you, there are no guarantees. At least not with this yogini!

My Thursday night – Sunday morning trip (thank you babysitters (Grandparents!) and Ben for helping me with the logistics of this!) to take a handful of classes and a workshop at LHOY went really well. Amazingly well if you consider where I was with my back just a week ago this time. Last Sunday I wasn’t even sure I’d be able to do any of this weekend, but this weekend I rocked it. For realz (yes, I just went there). Thursday night was take one/assist one and both were super fab. The take-class was my first back in over a week and it was slow and gentle and just what my recovering back and worried nerves needed to feel secure again in my asana. And the assist-class was awesome because, helloooooo, it was my last one! Nothing like a Type Aer’s love for checking items off a To Do list to make a girl feel good, you know?!

Friday and Saturday were where the real yoga marathon came into play. Friday morning I took three classes (one of which was Restorative, so if you know what that means, you also know how great that felt) during the morning/mid-day and then headed back to my friend’s house where I was staying to start planning for the yoga classes I’ll be teaching locally starting in September (more to come on that soon, in a different post). I’m not used to having quiet time during daylight hours and so it was fantastic to get that afternoon to myself and then some social time with my girls that night. Yay, sushi!

And while Saturday didn’t officially start for me until 10 a.m. (Skype’d with the kids prior to that which was beyond hilarious, mostly because they kept wanting to talk to my host/friend instead of me), once I hit the mat, I did not stop. In the time span of four hours, I took three hour-long classes (at two different locations!), two of which were full-on flows with the middle being a Basic. And alllllll three were hip openers! Based on how sore and achy my hips are today, I can now officially tell you that it might just be possible to open your hips so much in one day that they get completely pissed at you, so maybe I wouldn’t recommend that same approach for anyone else. Truth, though? I loved yesterday. I was wobbly jello by the time the third class ended, but wow, was it a fun day. Not that I often forget, but I had a “Yesssss. This is why I practice yoga!” moment during those classes that made me feel so on fire (in a good way!) and so strong. It was awesomesauce. And, to increase the awesomeness, I then got to participate in a three-hour workshop on assisting and a handful of my YTTs were there too AND we got to be social afterwards, which was so very fun (Yay, sushi! Again!) and so very needed. I’ve missed them these last three weeks after spending the whole month of July together, so it was beyond good for my soul to see them again. Plus, did you see the shirts T & I got prior to this workshop? Because sweating with our omies is exactly what we did all July long! 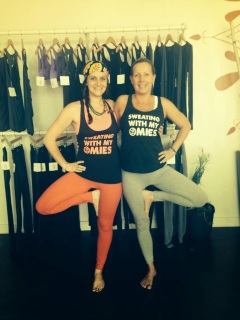 After all the fun and hilarity of the last few days, I suppose it was natural to have a less than smooth landing when I got home today. Speaking of landing, did I mention that I felt like I just got home from my intensive last Monday? As in, it took me from August 2-August 18 to finally feel like my head came back down to Earth and I was prepared to be at home with my Littles and getting ready to teach my various classes (writing and otherwise). Yikes! But more Yikes! today when I got home at 8:30 this morning (because I woke up at 5:30 and sure, doesn’t that sound like a humane hour in which to rise and hit the road for home?) and was totally unprepared, again, to be here. To be instantly bombarded with Mom! Mom! Mom! Paint my face! What’s for lunch? Paint my face! Where’s my snack? I’m thirsty! Paint my face! Mom! Mom! Mom! (for the record, I did paint them like Angry Birds this morning, if for no other reason than to quiet them for five seconds) and faced with laundry and unpacking and just all the stuff that comes with returning home. Sooooo not prepared.

To add to my lack of patience this morning was the fact that I was scheduled to teach Family Yoga again this afternoon. That’s all well and good and I’ve had my class planned out for days, but I was seriously Captain Cranky Pants all day long and even though I did my very best to sit and shake that off prior to teaching, I didn’t get rid of it all the way. So when it was my kid(s) whining and complaining and being uber distracting during Family Yoga, I about lost my sh!t. I didn’t totally cross that line, but I was close. In past weeks/classes, I’ve been very careful to avoid trying to parent/teach at the same time, but today I couldn’t see/hear past them, so I stepped into (somewhat tired and sore and cranky) Mama Mode in the middle of class. Thankfully it was a smaller group today and the other participants were mama-friends who were there with their kiddos, so while I felt bad for getting flustered during class, I also knew they would understand and overlook the whole thing. And, true to their characters, both were super gracious when we talked about it later and we came to the agreement that that is just life.

And it’s so true. In fact, our conversation made me see that moments such as class today are exactly why I will keep practicing yoga all my days…I need my practice to keep me going in the other moments, away from the mat and sometimes even on it, that are less than pleasant. Plus, the whole experience shows me how much growth I’ve had. A year-ish ago? I would have flipped sh!t, thrown my hands up in the air, and most likely stormed off (OK, probably not if I was teaching because even when pissy, I’m more professional than that), but still – that was my previous reaction to anger/frustration. Today, I was able to address it, adjust my headband to cover the outbreak of sweat at my hairline, and breathe my way through it. It still wasn’t pretty, but isn’t that the real lesson my children can take away from today’s Family Yoga class? That you just keep going, even when life is sticky and uncomfortable, because eventually you’re going to find even ground again and probably much sooner if you use your coping skills instead of blowing up completely. Mr. Rodgers said it all with his line, “What do you do/with the mad that you feel?” (which, btw, is totally a Daniel Tiger song lyric now), which is what today (and all other CPP moments) returns me to – choosing what I do with my feelings because,  holy wow, they’re all coming anyway…might as well work toward the higher good with each of ’em!