Somewhere, somehow, at the very end of the school year or the very start of summer, I stumbled upon the coolest idea for wiggly preschoolers. Perhaps someone suggested it to me, because I can’t find the exact item on any of my Pinterest boards, per say, and it’s just a bit too clever and crafty for me to think that I invented it all on my own, but here you have it – The Pocket Pillow (I did pick the name. I think.):

Not that’s ever been a serious concern, but we have been told that from time to time, Harrison struggles to keep his hands to himself at school or that he doesn’t always sit still during Circle Time. Now, if you’ve met my husband, the man who never stops shaking his foot/leg, or me, the woman who struggles to stay in one place for more than five minutes at a time (unless writing or reading), you might not find this surprising. Just sayin’. And trust me, as The One who gets touched nine times out of ten by HD, all the live long day, I know he likes to be close. He’s always been that way. We discussed ideas in the past with his teacher for ways to curb this at school, but nothing ever stuck. Then, somewhere, somehow, I came up with a lap pillow that might help. But this is no regular pillow; it is a weighted lap pillow with pockets for roaming hands and ribbons for fidgeting fingers. Viola! The Pocket Pillow!
After clearing it with HD’s teacher, I volunteered to make some for his classroom and the YMCA preschool in general. I started with five and I’m hoping that any of the teachers can use them for any of their students – not just HD’s class. I haven’t done any sewing since college, so I really can’t say if any of this will hold up to the test of rough and tumble (and wiggly!) preschoolers, but I gave it a whirl and I’m sharing my process with you here.
First off, you might remember this picture from an earlier post this week:

My very first sewing machine all my own! I found it on Amazon for a good deal and even though it is computerized and capable of all things fancy, I’m just thrilled I didn’t break it at any stage of this simple project. A friend had to help me with the bobbins and getting it threaded the first time, but I survived rethreading the bobbin and the machine on my own today (without swearing too much), so yay for that!
Speaking of cussing (there’s a transition for you!), I will admit that while these pillows were made with love, they were also anointed with a wee bit of swearing (just typed sweating, which is probably accurate, too) – Sorry, Miss A! The embellishing stage of this was really the hardest part because it took the longest and my poor fingers took a beating from it. Pushing a needle and thread through denim (which I picked up at Goodwill) to get all those ribbons and buttons attached took its toll on my hands and my potty mouth. Whoops. But look at how beautiful the ribbons are! And as long as the kids don’t carry the pillows around by them, they might actually stay in place. 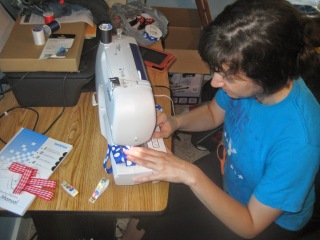 After the decorating came the stuffing. I don’t know enough about OT to know just how heavy I should have made these, but each one does have a bean bag on the inside to add just a little bit of gentle and hopefully calming pressure to the lap upon which it sits. Now this step was a brainchild all my own and I’m calling it a brilliant one at that! I was at the store last night to get fastening supplies (I went with velcro even though I know it might be noisy if someone starts messing with it but goodness graciousness – I did not want to mess with zippers or buttons at this point!) and was wandering through the school supplies (I was without kids, so yes, I wandered through Walmart. NBD.) and saw these little pencil case bags in the clearance aisle. They were not an amazing clearance item, but since the only other suggestion that had been given to me was cutting up and ironing shut painter’s tarp to keep the beans both dry and protected, I thought this was genius! So easy! So perfectly sized! So no-sewing-necessary! I didn’t weigh them, but I think each holds approx. two pounds of dried pintos.

Plus, somehow, they ended up matching the color of the beans, so they’re almost aesthetically pleasing, too, even though hopefully no one ever sees them (except for cleaning, which is totally why we wanted them to be openable anyway, hence the velcro-not-buttons-or-zippers).

And here’s the whole batch…some school themed, some Husker themed, and some just for fun, but hopefully all built to last (at least ’til Christmas) and to help calm some squirmy preKers.

As for what was left of this pile after the fact? Well that’s going to be pretty cool, too. Next weekend I’m participating in a Sole Hope Cutting Party with friends at a local church where we will take old jeans, cut them into shoe-shaped patterns and then send them off to be made into shoes for kids in Uganda who are getting sick because their feet are exposed to jiggers and germs. Please come join us if you can or consider hosting your own. Hooray for the helping! 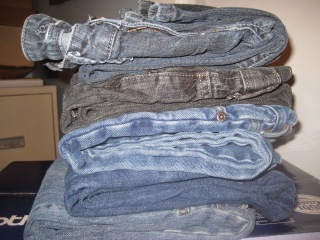