Sometimes the stars align and a gray and foggy Saturday turns out to be the best. day. EVER. After the hubbub of a holiday open house and prenatal training last weekend (which, oh my gosh, I didn’t even write about!), I was pretty excited to have a quiet weekend at home this week. We had a great staycation over Thanksgiving and as much as I love getting to visit people, it was really lovely to have time at home. As you may have noticed from my various posts over the last few months, this fall has been a wee hectic just in our day-to-day life, so any time we get to slow down and just be (and be at home) is quite enjoyable. And even though today has been far from just at home or slow, it has been lovely.

First of all, I got to sleep in, which you babes in parentland (or pet parentland) know, is a rare occasion indeed. And it wasn’t so much “sleeping in” as it was shutting the door and pretending to go back to sleep after the kids came in to open their Christmas book for the day at 6:30 a.m. sharp, and also pretending not to hear them as they played quite loudly before and after (during?) breakfast with their dad, but all the same, it was nice to linger under the covers/in the dark. I’ve picked up the pace with my yoga practice lately, which normally means I’d be at a class this morning, but I managed to hit three classes this week on top of the ones I taught, so I chose home this morning instead which felt nice, too.

Also nice was the fact that Ben already had plans to take the kids to a high school basketball game this morning so shortly after I “got up” they rolled out, leaving me to do some home yoga practice (think literal practice of Sun Salutations since avani will be hosting a 108 event on Dec. 21st for the Winter Solstice which I get to lead!) and laundry, before I headed out the door for some Christmas shopping (because hi, it’s December 13th and I haven’t done a bit of that yet. Whoops!). And while I did not make it to the Post Office this morning to ship said purchases, I’m still feeling better about the ever-present (ha – puny) To Do list that comes with December. Thanks to the hubs and kids for stopping at the store, we’re also sugar-stocked so we can practice making some treats for HD’s preK Christmas program which will take place next week. Side note: What gives H-town? We went to three different grocery stores throughout the day and no one, NO ONE, has Christmas (red) Oreos? How does that even happen?!

The true gift of today, however, came in dates that I got to have with both HD and RL. Truth? I originally planned a date with just Harrison that would take place while Raegan napped, but quickly realized this morning that she was going to be bummed by that, so after her nap, she and I headed out for our own girl time. But for HD, I picked up tickets weeks ago at our dentist’s office for a free showing of The Polar Express at the Rivoli downtown. As you may remember from the book countdown, Harrison is a bit enthralled with TPE this year in part because we discovered the soundtrack on Spotify over Thanksgiving and he’s loving this particular fast song (and will listen to it on repeat for 30+ minutes if you let him/can keep your ears from falling off for that duration):

So, yes. When I saw that TPE was one of the free holiday movies this year, I grabbed tickets, put it on the calendar, and was so excited to tell him about our date plans (but not until the day of because, whoa – if you don’t know that parenting trick yet, it’s a good one!). He was pumped, too, and we got there nice and early so we could grab good seats and a nice big (which was really the small, but wow) tub of popcorn.

We sat and talked about the movie theatre and the crowd and the book and all that until the movie started and then we settled in for the next hour-and-a-half show. Unlike the last movie date we had (which was the day before LT was born!), Harrison stayed in his own seat the whole time (as opposed to my lap), although there was a point in which he was very much leaning over on me (not that I was complaining). Also different was his agreement to leave before the credits were over (again, not complaining!), and in the lobby as we got his hat on before heading outside, he told me, “That was the best date ever!” Sweet boy! I thought, but then my heart about split in two (in a Grinch-growing-two-sizes-way) when we got back to the car and HD gave me a big hug, saying, “Thank you, Mama! Thank you for taking me!” before climbing in his seat. His eyes and voice were filled with emotion which made my eyes get a little teary because, goodness, do I love this kid. His sweet heart and ever-questioning sense of wonder make me so proud – it was so beautiful to be able to get some time for just the two of us and to see/feel how much he appreciated it, too. Who knew a free movie would turn into such a Kodak moment, but there ya have it – two happy souls post-movie: 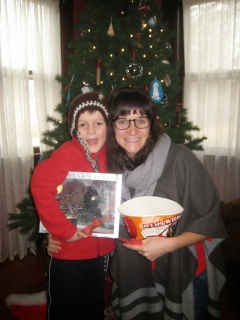 And then it was Miss Raegan’s turn. A friend of mine was hosting a liquidation party for a line of jewelry she used to sell, so I told Raegan pre-nap that we could go to that together and do some Christmas shopping, too, and sure enough, as soon as she got up from nap, she came running down the stairs to ask if it was time to go to see the jewelry. And because it was such a good deal (and because my friend S was so sweet to Raegge), RL walked away with a lovely collection (all in purple) which included a bow set, a toddler-sized bracelet, and her very first ring (butterfly shaped). I got a new necklace, and after we got home post third grocery store stop and quick side trip into Eileen’s for a shared frosted Grinch cookie, we modeled our new finery for the boys: 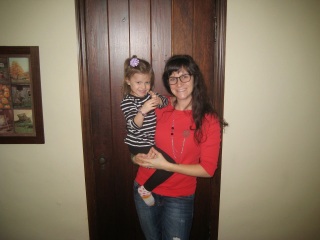 Date night with the hubs is up next (the stay-in version which, after eight years of wedded bliss probably equals curled up on the couch watching a movie or starting a new show on Netflix) and while I’m sorry that Linky is the only one not to get any special one-on-one time today, I’m comforted by the fact that I got a few hugs and snuggles from as well as the fact that almost 1 1/2 yr-olds don’t really understand the concept of dates yet and therefore can’t get too mad at me for not keeping the face time totally equal today. This, by the way, is his classic Lincoln growling but happy monster face. 🙂 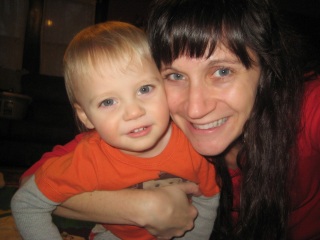 In terms of the weather, it was a less than beautiful day, but as for me and mine? It was a beyond beautiful day of time together in all kinds of combinations, and each filled with love.

Wishing you all some happy heart moments, too, as you continue your holiday prep!