This morning I made a slight parenting error by letting my children watch this viral video with me. I was hoping that since it was just the 3yo and the 1.5yo, they wouldn’t pick up on any of the suspect lyrics and would instead just enjoy watching the kids dance in their school, which they totally did. But then, because it is a catchy song (I would know because I’ve found myself jamming out in the car to it more than once in recent weeks), the minute it was done and the computer was shut, Raegan was back to doodling on paper at the dining room table, but singing as she did so. No big deal, right? Well, sure, unless you take into consideration that her version of the word “funk” sounds nothing like how the word is actually pronounced, and it was the only word she was saying, in super-speed repetition, so it sounded like she was cussing a blue streak at record pace, just like that!

Honestly? I had to leave the room because I was having such a hard time not busting a gut over the whole thing and I knew if she saw me do that, she’d just keep saying it. So like any parent with wifi and funny kid anecdote, I took to Facebook to share, only to find out that kids really do say the darndest (and most innocently and wildly inappropriate) things! Again, always nice to know I’m not alone. So who is with me on complete nap debacles on top of botched song lyrics?

Remember when I said that my husband jinxed RL’s naps a couple weeks ago? Well, it’s gotten a lot more interesting this week as Raegan has taken to napping not in her bed, but her big brother’s. It started over the weekend when we went to get the Littles up from nap and found her tucked in snug as a bug in HD’s twin bed when she had clearly been put down in her very own toddler bed 2.5 hours prior.

Well, as long as she wasn’t waking up LT, I didn’t really care where she slept, so after finding her there again after Monday’s nap, I decided yesterday and today to just put her to sleep there in hopes of cutting down on potential room wandering and noise while Linky was trying to get to sleep. Worked beautifully yesterday and seemed to be on target again today until an hour in to their nap when I heard definite ruckus coming from upstairs.

Side note: my pregnant lady hormones (more posts coming on all that soon, but I’m assuming that most of you have seen the photo announcement by now) are causing me all kinds of problems with my own sleep and it’s been over a week, maybe closer to two, since I’ve slept all night. It seems that I keep waking sometime during the early-to-mid morning hours and then really struggle to get back to sleep (only to have crazy pregnant lady dreams if I do) before the day officially begins. It’s been rough and I’m tired and cranky (and a wee bit constantly nauseous) as a result.

Today, of all days, I was told by one of my care providers that it would be really good if I took a nap this afternoon. I’ve been doing a bit of that anyway while the Littles nap and HD has his screen time, so when she said that, I thought (foolishly), no problem. But just as I was going to put myself down for nap, I heard what sounded like voices coming down the stairs, and this was after I was pretty sure I’d heard footsteps just a bit earlier. Cracking the door open to see if someone was sitting on the stairs, I noticed immediately that the freaking lights were on and could hear both kids talking/making noise. I flew up the stairs as fast as I could, barged into HD & RL’s room, and found her just climbing back into her brother’s bed with this in her hands: 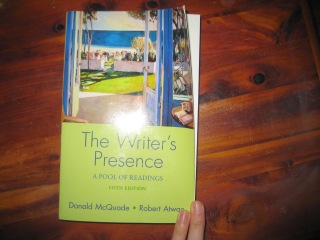 An old college reader from the days when I had a full-time desk at which to keep such items. My first thought? What the (insert RL’s pronunciation here) FUNK?! Seriously. I couldn’t believe her.

I took the book, turned off all the lights (she’d gone into the bathroom to get the step stool so she could reach the hallway switch, naturally), and put her back in her bed, telling her that she had been very naughty to leave her room and wake Lincoln, etc. She started bawling, of course, wailing on and on because she wanted to be in Harrison’s bed. Too bad, kid. You lost that privilege today with your shenanigans.

Then it was on to Lincoln’s room to run through his lullaby and put-down routine again, and while he was fine while I was singing to him, he was very unhappy the minute I set him in the crib to go back to sleep. I realized as I reached in the dark to hand him his sleep friends that part of his discomfort was that his darling big sister had pitched four different books into his bed on her run around and I’d put him down on top of them. After fishing all of them out, I said goodnight and headed downstairs, where again, I wanted nothing more than to take my own little cat nap. Instead, I got to listen to both of them cry for over half an hour before they got quiet again at which point I was finally able to close my own eyes and pretend to sleep for a little bit before they were both awake again at their normal end-of-nap time.

Mama just needs a little break in the afternoons, now more than ever. Here’s hoping the children (Raegan. I totally mean Raegan) realize that for everyone’s good, they should end these nap shenanigans immediately!

One thought on “What the Funk?”