All week long, the whole house has been excited about HD’s Kindergarten Orientation, scheduled for this evening. HD was pumped, ready to go see his new (to him – the building itself is quite established) school, and RL (and by association, LT) was excited to get to stay up past bedtime to hang with one of the kids’ fave babysitters while B & I took HD to the hour-long program at the school.

On the calendar, totally cool, ready to go for it. So no problem, right?

In the car, driving the handful-plus of blocks to get there, HD told us that he was “excited” and walking the whole way in to the building and through the long halls, everything was still totally fine. He held my hand the whole way but nothing seemed out of sorts.

We entered the classroom where all the kids were gathering and parents were saying goodbye-for-now to head into the gym for our own informational meetings, got HD’s name tag on, and then that was it. He crumbled.

In an instant, my smiling super-excited sweet boy started crying, and when I bent down to give him a hug and an “It’s OK” he latched on to my neck and would not let go.

Have I mentioned my crazy pregnant lady hormones lately? Yea, I thought so, so you can about guess the two things I started doing instantly when this all went down: tearing up and sweating. The leakiness of motherhood, my friends, is real and it lives on…even when the babe you are dealing with is five-going-on-six and soon to start school.

Now, no one else was having quite the same meltdown trouble that we were, and thankfully Ben was there to help me because had I been solo, I would have been a sobbing mess just like my dear child. I felt terrible that my kiddo suddenly felt scared or nervous or whatever it was that was getting at him exactly, but try as I did, I couldn’t get him to calm down; but then, I wasn’t exactly feeling so calm myself either at the moment.

Fortunately, there were some friendly and familiar faces coming into the room with their own soon-to-be Kindergarteners and the teachers were also very chill about the whole thing, so after Ben continued to talk HD down and I got some quick hugs and “It’s ok!”s from fellow mamas, we were eventually able to give actual last hugs and duck out the door. Talk about unexpected! But wouldn’t you know, by the time some other friends got in to drop their kiddo off (we had debriefed just outside the classroom), Harrison was apparently no longer crying. Thank goodness for turn-arounds that come just as quickly as the meltdowns, eh?!

By the end of the night, after the kids came back to join us for a final presentation and sang a goodbye song, HD was smiling again, saying he had a great time, and was willing and able to pose for this picture outside his elementary school, while holding his beautiful creation from the night – a sunflower, which went along with the theme of the name tags, storybook, etc. that was part of tonight’s program. Seeing as he is my bright, shining boy, my first sunshine when skies are gray, I found it oh-so-fitting for a night of, yes, rain (and tears), but also the promise of new beginnings. 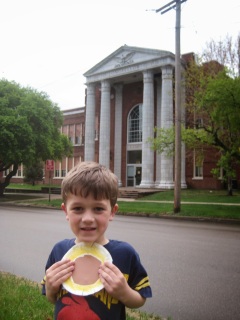 One thought on “My Sunshine”