Ha! Clearly I need to pay more attention to my own writing. In my most recent post for HVFH, I wrote about the notion that parenthood never really gets easier in the sense that we never totally leave the woods, but rather that the woods keep changing and therefore, so must we.

If I can summarize that for you, why couldn’t I remember that earlier today? Perhaps because my pregnancy insomnia has had me up in the 3’s or 4’s for so many days in a row that I no longer possess enough brain cells to string together coherent thought? OK, I can still use the word coherent properly, so I suppose I haven’t completely lost my mind yet (coffee helps), but clearly my short-term memory is suffering. Either way, I learned this morning that this parent-of-a-school-aged-kid gig is both LEGIT and a total blur, and I found myself faced with some serious naiveté that was quickly squashed.

Here’s the deal: today was HD’s first day of Kindergarten and a little part of me thought that once we got past the logistics (which are still going to be totally up in the air here as soon as I go into labor), this whole having “just” two (eventually three) kids at the house during the day thing was going to be easier.

Then today actually came and I realized, nope. Not easier. Just different.

Now, none of that is to say that this morning was bad. HD did such a great job with drop off  (no leg-clinging and no tears – from him, anyway) and he was even fairly helpful and compliant with getting ready for school (minus the fact that we could not find a blessed match for his pair of school shoes). But holy moly cow. We hit the ground running this morning and it was pure chaos trying to get everyone fed and dressed and a lunch made for HD and then all of us out the door on time, and that’s with only one of them going to one school. In a couple weeks, we’ve got to get RL ready and out the door even earlier to ride to school with Daddy three mornings a week and when I realized what our day-to-day will be like for the, um, next 18 years, all I could think was wow, just wow.

Silly me. Somehow I thought I was going to get up and get showered/dressed like a real person – you know, for at least the first day, but again, a big old Nope. So did not happen and chances are, it never will. It was yoga pants and a baseball cap because of all the aforementioned hubbub, but hey. We made it there, in one piece, and I managed to keep all of my ugly-cry tears contained until I got back outside the school where I could shed them in front of friends and not my kiddo. I don’t care what pants you’re wearing – that’s a win.

But as for easier from that point on? No. This day was not easier. The challenge came in part from the lump in my throat I had to swallow a few times throughout the day from missing Harrison, and also from my brilliant over-scheduling skills at work again, as I managed to load today with LT’s (belated) 2-yr-appointment and a hair cut, to boot. He was superb at both, thankfully, but I feel like we had  a lot of in-out of the car and the house today as a result.

There might be some blessing in that, though, as our time IN the house, “just” the 3.85 of us, was again, not easier, but different.

Both LT and RL gave me attitudes and meltdowns that challenged every ounce of my sleep-deprived patience. Thank goodness for bits of karios (post-nap snuggles from the 2-yr-old and a “Thank you, Mommy, for playing with me” from the 3.5-yr-old) and a 20 minute power nap to get me through until it was time to pick up Harrison from school.

But again, silly me. I decided to walk the six-ish blocks over to the school with the kids in the double jogger to collect Big Brother, and although he was all smiles when he exited the building and saw us there waiting for him, when he actually joined us and found out that we had walked, not brought the van, he was in tears (transference of the day’s stress and excitement, perhaps?). “You didn’t tell me you were going to walk! I don’t want to walk! I want to trade seats with Raeagn! Make Linky get out and walk!” and you get the idea. Fun times, as we navigated the mass chaos of the elementary school post-final bell sidewalks (not actually the most double-jogger friendly place, I learned).

I managed to get him four blocks away from the school walking and talking about what we could have done differently (i.e. warned him) and did my best to explain that no, I was not going to send one of the other kids into meltdown-mode so that he, the 6-yr-old, could ride in the stroller. His next tactic was to run in front of us to block the sidewalk, and when I rolled right up behind him he then sat on it the front foot-ledge, only to realize “Heeeeey, this is a pretty good seat.”

And so, I pushed all three of them (and all happy passengers, I might add) the rest of the way home like this: 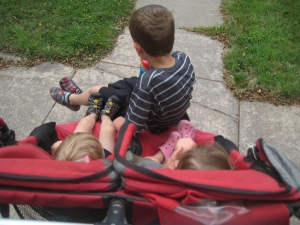 Truth? At that point, I was not happy. Somehow I managed to stay calm and collected the whole way up until my kid stopped throwing the fit and then I wanted to fuss and yell about how ridiculous the whole thing was in the first place. Again – every ounce of stretched-too-thin patience had to be applied from doing just that.

There is a reason there are all those e-cards and jokes about adult-ing being so damn hard. Unlike the 3-yr-old, you don’t get semi-passes for tantrums and that is just not fair (another element of adulthood that is no fun to accept).

As it was, though, we made it – both home and through the hair cut (and home once again). We experienced and we survived and we even enjoyed various parts of this day. That’s the most we can ask of any day, I suppose, especially one filled with so much anticipation and transition. And, for my own sake as much as anyone else’s – let us repeat – no one day is necessarily going to be easier. “Just” different.

One thought on “Different”