Now that he has been here for one entire week, it feels like a great time to check in and record what we have learned about our new Little Man in that time. While Truman’s pretty much been in eat/sleep/poo mode for most of his time here thus far (as any good newborn should be), we’ve also gotten some fantastic little glimpses of his personality and preferences in this world.

For one thing, you can totally tell that Truman was “fully cooked” by the time he came out, as he is totally capable of feats like handling tummy time like a pro (turns his head side-to-side during it, too) and keeps trying to pick his head up off your chest if you hold him up to your shoulder (hang on tight!!). And even though I think all babies tend to look like grumpy old men, you could see Truman’s serious, pensive, thinker status from Night One:

He also pulls these faces while sleeping which lead to Ben discovering on our first day home that Trumy’s spirit animal (or Patronus, if you are HP inclined) is totally the bear. With each of our babies, from a fairly young age, we have had clear indications of each of these animals; it is always organic, so-to-speak, in that we base the choice on their behavior and have never had to force the connection. For HD it was the monkey, RL, the owl, and LT (from the womb!), the frog.

With TJ, I had no clear ideas in utero, and even after he was born, my mom asked me if he had an animal yet and I had nothing. But Wednesday morning, after Ben had just put him on the bed post-diaper change, a little arm instantly swung up over his eyes/face to block the light, causing B to chuckle and ask, “Is this going to be our little bear who likes to hibernate?” And just like that, everything clicked.

Yes, actually, he does like to hibernate, and chose to do so in my belly waaaaaaaay longer than either of his brothers, anyway. And now that he’s here, he’s very much a sleeper and snuggler, and has that whole brooding brow thing going that seems pretty fitting for a bear, too. 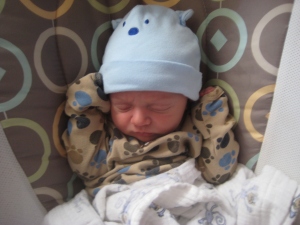 Another reason this animal is so darn perfect is that one of Truman’s namesakes is also a bear at heart. Named for his daddy, Benjamin John, Truman John is also a nod to my brother, John Thomas (which connects to Linky, too), and since we were teenagers, my brother has been known in our family as the Bear. A night owl (hmmmm – RL connection, as well?) in his core, John was a classic late-morning riser teen and was never terribly, um, pleasant once he got up (Sorry, Brother; you know I love you!). This led to my dad calling John growly, which naturally led to his spirit animal nickname and the rest of our family asking each other, “Who wants to wake the Bear?” or warning, “Don’t poke the Bear!” every weekend.

Even though I don’t think my kids have heard us call him this yet, Harrison has noticed that Uncle John likes to sleep in when we are all together (which he should because he’s on vacation), and an online convo with my futureSIL about this totally led to Uncle Bear emerging as yet another version of the name this summer. So, yes…the Bear, it seems, was meant to be for the pair of JT and TJ. I can’t wait for them to meet and hibernate together later this year!

One final observation for Truman from Week One? He seems to be pretty tolerant of his brothers and sister who want to see him, “pet” him, hold him, and kiss him All. The. Time. He lets them come and go as we nurse without issue and calmly moves from one lap to the next when we do a holding session (which has turned into a requested photo session each time, too).

And this – this is why we wanted a family of this size…so much love shared and so much fun to be had together. We are all so thrilled with the cuddle bear that is Mr. Truman!