Going on 24 hrs.+ since coming out of surgery and now being at home for 24+ hrs., I’ve hit the realm of tired and sore.

Try as we did to get me all situated last night, sleep did not come easy. A gurgling humidifier (that is my nose’s best friend beside the pain meds and gauze combo I’m still rocking) and mouth breathing while trying to sleep in a pretty much upright position on the couch just didn’t work. So instead I wrote and took little cat naps between midnight and medicine at 2 a.m. and then, of course, the baby decided he needed to nurse at 4:15 for the first time in forever.

Guess he missed me yesterday, too. Poor little buddy.

So we nursed and then I held him sleeping on my Boppy until the Bigs all got up, which was typical noisy chaos until HD and RL rolled out with Grandma to go hang at her place for a couple days. I will miss them while they’re gone, but it makes SUCH a difference to have just the toddler and the newborn (can I still call an almost 4mo a newborn??) here in terms of me getting actual peace and quiet during the day. I mean, Linky is still part pterodactyl, but he’s got his best buddy Daddy at his disposal, so he’s a pretty happy shrieker.

Truman was fairly fussy last night and this morning but seems to be getting back to normal as the day plays out and has been napping/nursing nicely.

As for me? I’m probably the most unhappy camper in the house right now. I thought 24 hours out might mean feeling loads better but actually my face is pretty darn uncomfortable right now. I think part of that might be, however, because I made the mistake of looking at what exactly was shoved up my nose.

I won’t go into detail and I won’t post pictures (because I’m not taking any!), but the stints are, well, intense and now that I’ve seen them during a gauze change/attempt to clean my face a bit, I think I can feel them more. Good news is, they are coming out Thursday, so at least there is a finish line in sight and it’s closer than Friday (duh, but I’ll take it).

What I do have pics of, though, is my crazy attempt to prop and cover myself for sleeping today; B must have been entertained by it because he offered to photograph the situation before heading downstairs to hang out with the boys, leaving me to snooze. This is what it takes: 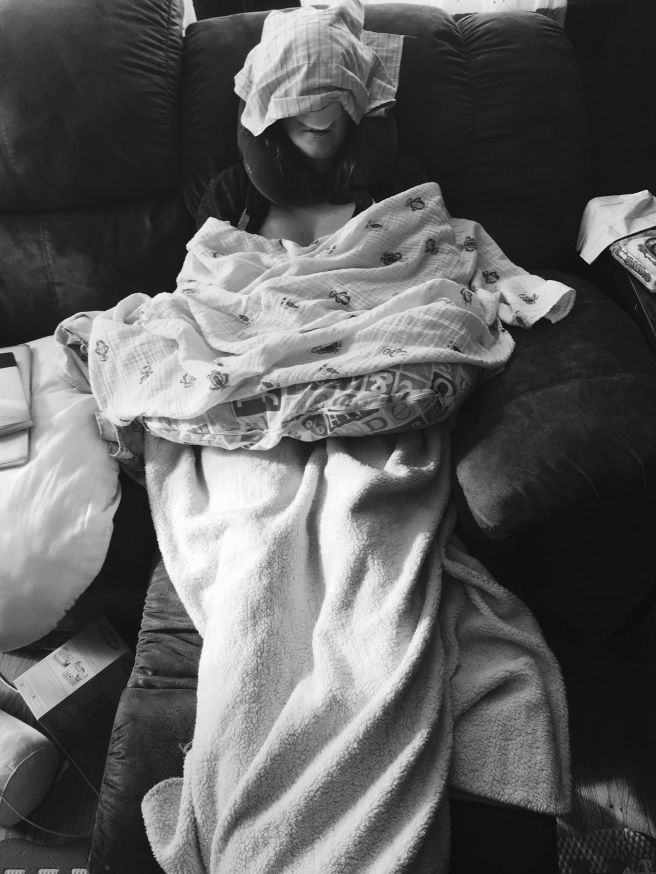 Blankets, a Boppy to support my arms, a neck pillow to support my head, and a burp rag – yes, burp rag – over my head to block the light. It’s possible that in another life I was a bit high maintenance. 😉

But it sort of works, even though my nose is making weird noises now when I attempt to sleep (is my mouth closing? is the saline spray doing something? I have no idea beyond it being one more thing to wake me up), so I’m just going to keep at it on my corner of the two-couch, hoping that the next 48 hours (less!) go quickly and smoothly.

One thought on “Day Two”