It started like this: RL started biting her nails again sometime in December and then she stopped again, so I told her we could paint her nails yesterday as a reward. Except then I forgot until she reminded me mid-afternoon today, right as I was getting ready to get LT up from nap.

It continued like this: Linky obviously and without hesitation wanted his done too.

I tried to get him to agree to let me do his toes, as I have done for all three of them many a time. But no, he gave me his hands and made it very clear, “Me too. Paint, Mom.”

So I did. I put a single coat of bright red polish on 20 little fingers and then I could not stop staring at what I had done.

Lincoln was thrilled. Raegan, too, but it felt far less conflicting for me to see her fingers tipped in the rosy color than it did to see his. I mean, the kid willingly let me take his picture and he smiled for it, too! Clearly he was a happy guy! 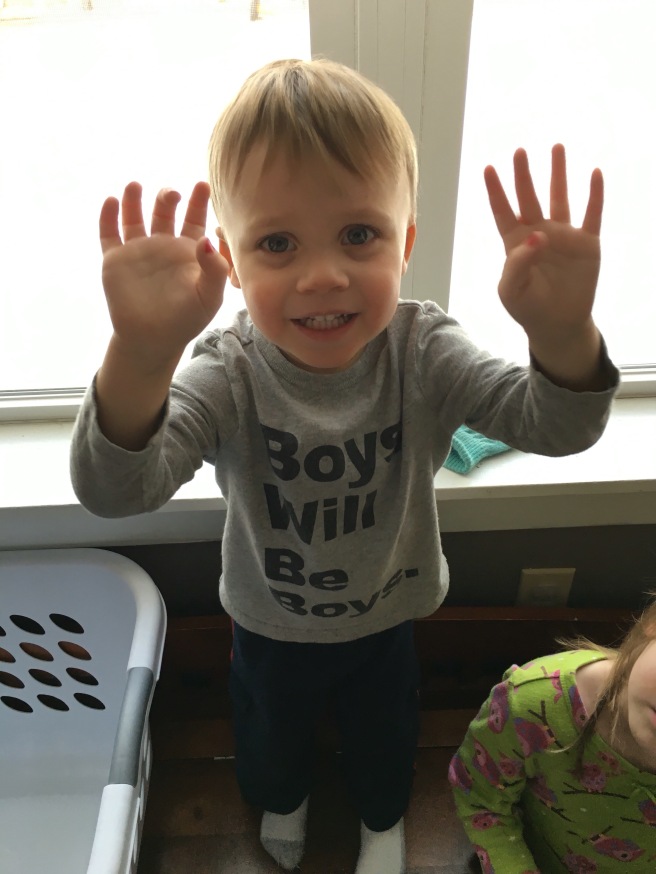 Perhaps it is the combo of the nails with today’s shirt that really got me. Just like the fingernails, this shirt has caused more conflict in me than I ever imagined when I first ordered it after seeing a picture of a friend on Facebook’s kid wearing the same one.

Originally I thought it was cute because I am 3/4 Boy Mom, and I pretty much need visual reminders of how it is OK that boys are so loud and physical and noisy and wild and they stomp a lot and so on because it is all so counter to my own nature. But since it arrived and Lincoln started wearing it, I don’t know. I look at it now and think it might also stand for all the behaviors and ugliness that society tends to sweep under a rug when it comes to holding males accountable for their actions and that I don’t like or condone.

Or maybe it is just a shirt (and one that I don’t care if it ends up stained).

Either way, the attitude T plus the bright red nails struck me as both funny and odd and I spent the rest of the afternoon fighting the urge to whip out the polish remover and clean his nails off quickly.

The polish lived though to greet Daddy after school and Lincoln danced a jig he was so pleased to show it off to him after he had commented on Sister’s pretty nails. To Ben’s credit, the only signs of alarm he showed were some slightly raised eyebrows and a, “I thought you only did their toes?” To which I just lifted my arms in a shrug to say, “I thought so too???”

Now the polish is off to bed, and I have the rest of the night to ponder why this was so hard for me. I have always – and still do – believed that I will be capable of and willing to support my children and any life choices they make. However this is not a declaration of a life choice. This is wanting something because an older sibling wanted it first. So why the hesitation and minor freak out on my part?

I think what pulls me up short are thoughts of what others might say if they see one of my boys wearing bright red nail polish. I don’t want them hurt by comments nor do I want to invite in criticism or judgements of myself as a parent. 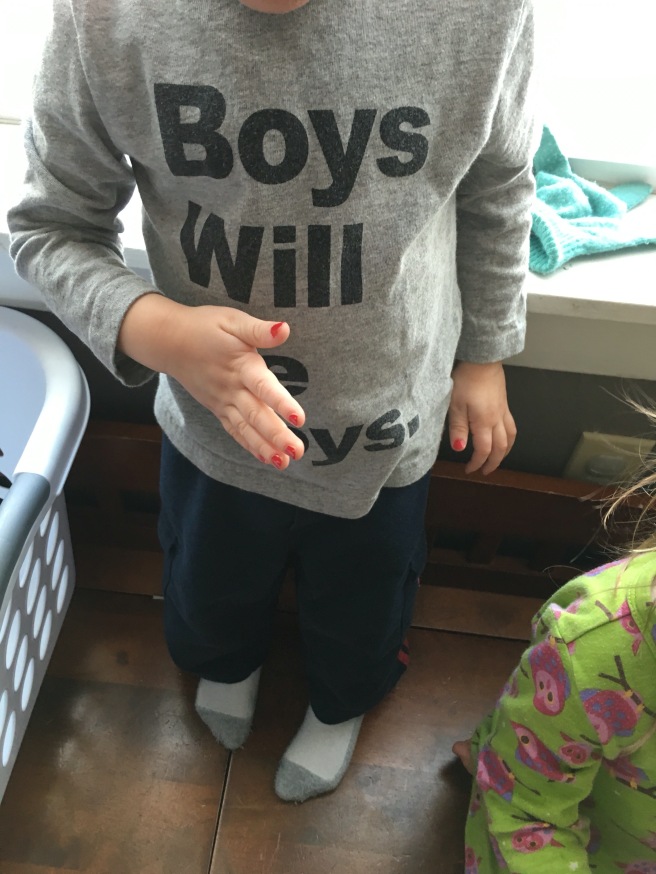 But sometimes those outside voices, or the potential for them anyway, just have to be silenced.

Today I allowed a simple pleasure that brought one of my children great joy. I said yes, even when social norms I didn’t realize we’re so prevalent in me made me want to say no. And while I don’t know just how long we’ll keep it on him, if anyone tries to give me/him shit about it, I am just going to say it is a tribute to David Bowie and let the haters hate and the likers like because if there is one thing I know, it is that I can’t control the reactions of others. So we might as well wear the polish and celebrate little joys.