I haven’t yet taken this inquiry to The Great Google yet, so perhaps you can help me out instead. Do you think it is possible that my sinus surgery four months ago really impacted my sense of smell? As in, turned my sniffer into an uber-smeller?

Since the healing process mostly resolved (I still don’t want anyone or anything coming anywhere close to touching my nose as it still doesn’t feel quite right enough to handle contact of any sort yet), I have spent the last couple months marveling at how strongly certain smells smell to me now.

As in, a couple times, I have actually wondered, Am I pregnant?! This is just like a pregnant nose! But since that is very much not the case, the only thing I can figure is that now that I can breathe so much better, I can also smell so much better. And that being said, holy moly cow, thank goodness I did not have this whole equal septum thing during any of my pregnancies because All The Smells might have just been the end of me.

As it stands, I still find myself quite often quite freaked out by the overwhelming odors around me, and my new nose is also getting the blame in some friendly marital disputes, such as, Is the water in our new-to-us fridge OK or not OK?

Appliance Gate Update: after our fridge decided to kick it two weeks ago, we went through 48 hours of sheer panic, social media crowd sourcing (bless your hearts for helping us!), and an almost order of Wonder Fridge (seriously – the holy grail of fridges on a great sale, but still close to $1,800 when all said and done, which, ouch),

ending in a $350 purchase of a used/repaired one instead from someone here in town. I mean, if ever two people were winning at Adulting and Dave Ramsey, it was Ben and I the week of the fridge fiasco!

So anyway, new-to-us fridge came and thankfully it included my much beloved crutch of the water-in-the-door dispenser, but it was clear on first pour that something wasn’t quite right. There was a funky odor/taste happening and I was not the only Welschie to notice. After a couple of days of trying to run a bunch of water through to flush it out, we got a new filter installed, flushed that out properly, and things seemed to be better. As in, they were better, but still not 100%. And that, my friends, is where Appliance Gate turned into Aroma Gate.

My husband thinks nothing is wrong with our water now. He can neither smell or taste anything amiss. Mostly. I, however, contend that while not always there and not anywhere as stale/funky as at first, it just isn’t right, which lead to my dear husband blaming my new nose for the dissatisfaction. For real?! But yes, he claims that because I am super smelling, I am super sensitive to the change from our old fridge to this one.

So I once again find myself turning to you, my family and friends near and far, to see what you think. Is my new nose nuts? Is my hubs? Just kidding – he’s no more crazy than me which may or may not be a ringing endorsement after the last few (looney) posts I’ve made here, but really – what is going on here??

And what do I do about the water dispenser? Do I get a test to make sure nothing is hiding on the inside so I can at least put my mind at ease while I let me nose/palate adjust to the smell/taste? Do I just assume it is fine and let it go (ha! funny)? That seems tricky because right now there is a lot of doubt stemming from my nose seems to know and I don’t foresee this super smeller standing down any time soon. To his credit, my hubs tried to do a vinegar flush that I found on the Interwebs but we couldn’t get it go through the water line at all, so so much for that. Any other ideas?! 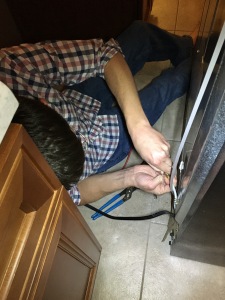 Talk about an unexpected outcome of undeviating the septum!

One thought on “No(se) Doubt”