So I blinked and it is now the end of April. Say what?!  How did that happen?! Perhaps because this month has been filled with weeks exactly like the one we now find ourselves in – FULL.

Calendar-wise April has been a bit of Crazy Town — you add in soccer practices/games, some extra meetings for Ben, and some freelance work and book club hosting (both this month!) for me, and wow, just, wow. It is not shocking at all that the month has flown by in an instant.

This week has been especially full not only in activity but also significance of our goings on.

Both Harrison and Raegan had field trips this

week and Wednesday was especially well-timed because B’s parents were here for the day (
Grandpa Dave went with Harrison to school for the day as part of the Watch Dogs – Dads Of Great Students – program), so I could actually go with Raegan on her’s (for the first time all year!).

Harrison’s field trip was Monday and while he had a great time, I think, I heard hardly anything about it because the start of this week found us in a whirlwind of health alerts.

First was Raegan who, while extra whiney over the weekend, showed no signs of anything

being wrong until just before bed Sunday night when she refused to let us towel-dry her hair after tub time because her ear hurt. Sonofa! Pain was still there Monday morning and so was a slight fever so off to th

e doc she went and sure enough, an ear infection was raging. Thankfully we got her on meds right away and she started feeling much better, so she was totally fine to visit the T.V. station with her class on Wednesday.

However, Monday’s excitement was not complete, as Harrison came home a total wreck that afternoon. Complaining of an awful headache, he got sick and then fell asleep on the couch after school and my first thought (after SONOFA!!) was, he has the flu. Awesome. 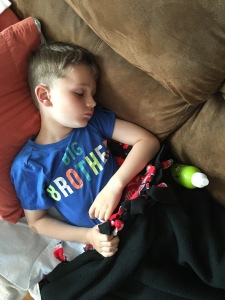 But then he woke up, wanted to eat supper, and it was then that we heard the rest of the story – when he took a nasty tumble on the concrete at the end of noon recess that day, he did not just hurt his elbow (the part his teacher told me about at pick up), but apparently bonked his noggin real good on the ground, too. As in, massive goose egg, a good 5+ hours later, still there.

After checking in with his teacher, we put it together that the bleeding elbow must have distracted him quite a bit because no grownups knew about the bump on the head. So we explained to HD that he needs to tell someone about ALL the bumps in the future and sent him off to bed. But I was a nervous wreck because I felt like I had done everything wrong that I possibly could for a kid with a potentially serious head injury, so I made Ben call our peds’ office after hours to speak with someone (motherhood forces me to make so many phone calls, but ones where I might burst into tears because, hi,  worry/guilt/fear? I’ll gladly pass those off to the hubs if I can). Thankfully HD’s situation/symptoms weren’t as serious as they could have been, and he was totally fine the next morning. But, wow – the things that can spin you off in a flurry of questions and concerns. They seem endless some days.

As for me, the focus of the next few days will be yoga-heavy. With classes tonight,

Saturday, Sunday, and a special workshop Sunday afternoon, there is a lot running through my brain. I have to say, I am pretty excited that B and HD only have a few weeks left in the school year because I am totally looking forward to catching our breath a bit this summer. Ever since Trumy’s arrival, we have been hopping, so getting to slow down and just enjoy some time together is going to be a wonderful gift. Whether that means more or less time for writing? Well, that is TBD!