Do y’all remember how 2016 started out totally Country Song Gone Wrong for the Welschies? It was really one ridiculous thing after another and I have to say, that trend continued well through March and the first week of April with the fallout of not one but two major appliances in our house.

You may also remember that during this time, we were taking Financial Peace University classes for the first time (we’ve been quite familiar with the program for years, but actually taking the classes is a different experience), and thanks to our Emergency Fund and paying extra close attention to our Budget (you guys, I’m the Free Spirit to B’s Nerd, so even writing the word Budget can be hard for me, much less sitting down to look at one), we paid for the new washing machine (without running up the credit card bill) and then got one heck of a deal on a fridge (yes, I tested the water; yes, it is fine; yes, my nose is crazy) and still managed to keep Baby Step No.1  (said Emergency Fund) afloat by the end of the class in early May. Cool, huh?

Even cooler is what happened last week when Ben took our van back into the shop to get it checked.

Say, what? How is taking your vehicle to the shop EVER a good thing?!

Well, in this case, we had no idea what we would find out, but for months – months! – the van has been chugging a bit when I go to start it and totally threatening to leave me stuck somewhere (a couple times for sure I thought I was going to be stranded at my chiro’s office in GI!). I learned to rev the gas a bit when starting it, though, and mostly things were OK. But then it just kept chugging and sputtering and finally I told the hubs he had to take it in which he did the morning of his last day of school last week. 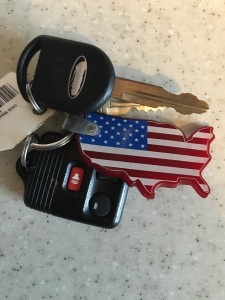 And you know what the darn problem was?! THE FUEL PUMP! The very same part that died on Jan.1 and started our whole year off on a tilt!!!

So why am I doing cartwheels instead of shaking my fists at the sky? Because the darn thing is still covered under warranty and everything – parts, labor, EVERYTHING – was at no cost to us! 48 hours later, van was back to us and running fine, even though I clearly developed a heavy foot habit because I keep revving when starting. Whoops!!

Even though I wanted to tell Murphy to go suck it in March and April when our appliances kept kicking the bucket, I can see now that our hard work is paying off and Murphy is on showing himself the door.