Oh, wow. I did not see this one coming.

Actually, maybe I did.

Either way – foresight or hindsight or whatever, we had a very interesting first drop off for Mr. Lincoln at preschool today. Thank goodness he is my third or I would have been an even sweatier mess than I already was and probably would have been crying.

The 3yo who has been asking for WEEKS “I go to school? My turn? Me go to school?!” freaked OUT about actually going to school. 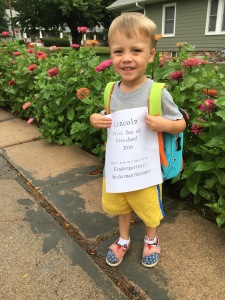 Perhaps what caught me off guard was just how calm he was the whole morning. He wanted to wear his backpack to take Harrison to school and smiled for pictures for me with his little sign (btw – I think “Kindergartner/Spider Man/Scooper” might just be my favorite “what I want to be” answer to date) and chattered away happily in the van the whole way to the Y; I mean, you guys, he even gave me directions so I wouldn’t mistakenly go the wrong way to get us there, he was that on top of his game!

But then we got to the door and his teacher was there greeting folks and boom. He balked. BIG TIME. And then the next hour was terrible.

Jokes – it was five minutes. Maybe six or seven, but it felt like a dang hour and of course I was also trying to hang on to Trummy and a diaper bag and keep an eye on Raegan who was watching with wide eyes next to us, and wow. It was rough.

Hiding behind my legs. Yelling NO. Grunting disapproval. Flat out crying and screaming when I tried to go into the room without him to lead the way. His teacher and two of the other teachers were all trying to help and it was just NO NO NO for those 5-7, maybe 10? torturous minutes.

Poor Linky. He has wanted to be a big kid since forever, but he is still such a little peanut. Just 3 and change, and outside of home, pretty reserved. Preschool is a big change, even if he’s been seemingly excited about it for months.

So. Finally, between teachers coaxing and RL being willing to go in with him to his classroom, we got there. He went inside and was apparently smiling within a minute of being in his classroom. I wouldn’t know because I stayed out where he couldn’t see me and then skeedaddled away before he could lose it again.

I know he’ll be fine. He’s clearly got great teachers there keeping an eye out for him and

his amazing big sister will be doing plenty of that, too, from her classroom next door.

And as for Linky’s slightly frazzled mama? Well, I am doing remarkably fine and am rather amazed by the Third Kid Magic because instead of freaking out or bursting into tears myself, I was fine. I knew we’d get him in eventually or not and either way was going to be OK. Even with an audience of parents observing us in the hallway (are you kidding me? they were all very kind – and some of them even laughed when I came back out and said to Truman (tell me others of you talk to your babies all the time and don’t even realize you are doing it so that when other grown ups hear you and you realize you are really just talking to yourself it is is a wee bit embarrassing??) “Well, that was interesting!”)

Here’s hoping Lincoln has a great morning and that come Thursday, the balking is done!

One thought on “The Balk”