Here’s the deal. My van currently smells like feet. And as much as I love my kids’ feet (visually) and as much as I don’t think it is actually their feet causing the problem (we have yet to enter the world of smelly gym bags and whatnot), the odor is OFFENSIVE and concerning and totally unexplained.

So I didn’t actually ride in the van over the weekend and it was only used on Saturday, as far as I can recall, but I know the smell was not there last week when I was doing the normal preschool runs. Yesterday, though? The preKers and baby and I went to climb in to take RL to school and opening the door we were all like WHOA. Which is actually good because nine months post-sinus-surgery and I am still astounded on a regular basis by what all I can smell, so I figured there was strength in numbers if the kids could also detect it. But that is where things are actually bad because if the stench is strong enough for them to smell, too, we really have a problem. 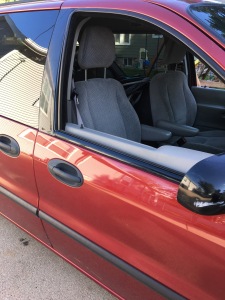 My first attempt to clear the air was, after looking for the culprit and finding none, to leave the windows open all day until it was time to collect HD from school. And really, that seemed to do the trick. No one was super worked up about it  and I figured that was the end.

Until this morning, however, when we had a repeat of opening the door and WHOA except today the WHOA was actually WHOA, which, if you speak blogger, is pretty intense. Again — I looked and looked in the whole two minutes I had to spare before we were definitely going to be late, but nothing. I can see nothing that could be considered the source!

So where the eff is this coming from and how in the world do I make it go?!

Any theories? Suggestions? Remedies? My poor, super-sensitive uber nose (and those more mortal ones of my Littles) would greatly appreciate help here!