Believe it or not, from time to time, I stop and think, Should I really post that?? That being a status update or a picture I quickly snapped of my kid or sometimes even a blog post. Yes, there is in fact a filter in place. Occasionally I let the filter broaden a bit and I get a little more real because life ain’t always pretty. It’s just not.

You can consider this one of those less than pretty posts.

In the last two weeks, our morning routine has been, ummmm, strained by the 3yo. Take your pick of the threenager vs. 3yos are a**holes debate as evidence that I am not alone here, but wow. When the 3yo decides to be VERY 3YO before 8 a.m., Mama about loses her damn mind. For one, I have not had my coffee yet by then because I have to wait for my first cup until after I nurse the baby down for his first nap. So, my Go Get ‘Em-ness isn’t quite functioning well, much less prepared for meltdowns and BATTLES OVER WEARING PANTS.

Yes, pants. PANTS have been the culprit of both of our disaster mornings with Lincoln here recently, and for the love of all things holy, can someone please explain to him that we live in NEBRASKA and WINTER IS COMING? He is going to have to start wearing ever-lovin’ pants and soon.

The second reason this crap makes me crazy is that it unfairly puts stress on Harrison as we are then late to get out the door and walked over to his school. He shouldn’t have to be counted tardy because of his brother, but we can’t just leave said brother at home in no pants, so we have to wait until I can get something on Lincoln’s legs and then get him hauled into the stroller.

This morning’s meltdown was heightened by the fact that when I finally got LT out to the stroller where the Bigs were waiting, I found that they had managed to break the only opener we have for our garage door by pushing it too many times.

I’m sorry. Am I the only one out there who is constantly amazed by all the shit kids can manage to break? Things you never could have predicted they would break? Kids break all your shit is a parenting Truth that all people should be warned of when they bring their first kid home. Honestly. [side note: please, do not take my reality sharing for lack of gratitude. I love and am thankful for my shit breakers, even when they are currently breaking my shit.]

So. Screaming/refusing to wear pants (I got him in shorts) 3yo, and shit-breaking Bigs. Not the best 7:40-7:50 a.m. I’ve ever had. And, because I am human, I got frustrated. And when I get frustrated, I tend to throw things.

Now, I’ve never been a hitter and sometimes a yeller, but here is the truth – throwing things happens. Normally I throw pillows. Yes, pillows, from the couches in my living room (you guys, I just realized they are called throw pillows, so I don’t think I am actually that off target here). I do not throw them at people, just as hard as I can at the floor and that usually helps.

Here comes the shameful part: today, because we were already in the driveway, I snatched HD’s backpack off the top of the stroller (Why? Because I suppose I was quite pissed about the garage door and wanted him to carry his own dang bag to school instead of making me do it?) and chucked it at the ground. And guess what happened next? Water started pouring from his backpack.

Yep, in my childish angst, I broke my child’s cheap-ass water bottle that was inside his bag. Awesome. What a terrible and immature lesson I just gave my kids, right? Right.

In panic and remorse and already late anyway, so why  not? mode, I went back in the house where lo and behold, we had an extra bottle that would fit the same nozzle and began to fill it up for HD. He followed me inside and, because kids are amazing like this, wrapped his arms around me as I filled up the “new” container for him. And he just held on until I got the task done and talked to him; when we left the kitchen – again – a minute later, we were both OK. I apologized and he apologized and we high-tailed it to school just fast enough to get there in time for a quick Kissing Hand before his class went in for the day. 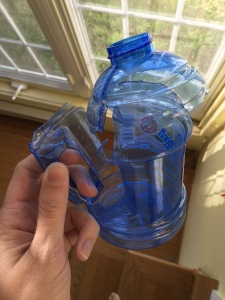 So why I am sharing this? Because this is real. I had a crap moment and my kid forgave me anyway and I learned that the throwing has got to stick to the pillows. I don’t hit my kids because I don’t want them to hit others. I also shouldn’t throw their stuff because that’s not exactly teaching them to care for the belongings of others.

No pillows around? No throwing. Foot stomping and deep breaths, it will have to be. Because guess what? My kids are going to continue to break my shit. Apparently I am capable of breaking theirs too, and cripes, if that isn’t a kick in the pants moment of humility, I don’t know what is.

P.S. Ironically (not really – just a moment of No Mama Alone), my friend Kim just wrote about forgiveness and apologies and kiddos. You should check it out here.

2 thoughts on “Don’t Blow Your Top”