In what appears to be an alarming trend this month, we – the Welschies – find ourselves in the midst of another long and rocky week. Like FULL to the max with commitments for the grownups and still not done as tomorrow is a 12+ hour-long day for Ben because of PTCs.

Apparently the Little Welschies wanted to add to the fun and hilarity of our schedule because they started their Wednesday at 5:30 a.m. – except neither Ben nor I realized that because the little buggers SNUCK DOWNSTAIRS AT 5:30 IN THE MORNING AND TURNED ON THE WII AND PLAYED MARIO KART UNTIL WE GOT UP AND FOUND THEM AT 6:45.

WTFAYFKM – all rolled into one – is how one might describe the looks on our faces when we realized just how early they had gotten up and just how they had been spending their time.

A little backstory: weekend before last, we attended a fundraiser for Food4Thought, one of our local faves when it comes to mission, donating, and events. They do amazing work in the community and are excellent at engaging kiddos in their cause. They have this not-so-little fall shindig with a Mario Brother’s obstacle course that our crew adores, and this year the event also included a projector hooked up to a Wii with Mario Kart on tap. 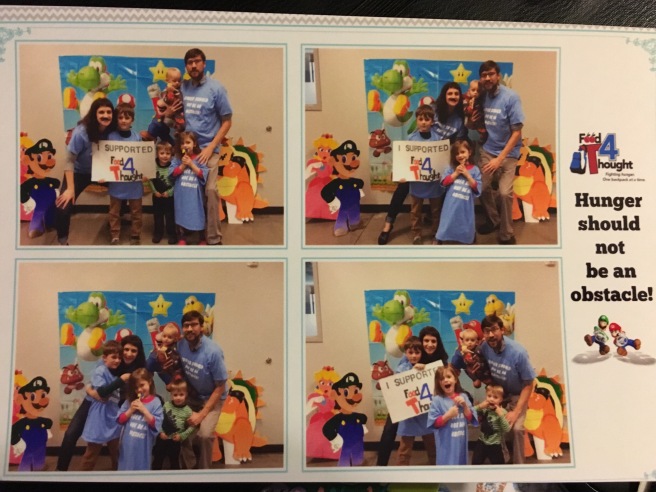 Now, Mario Kart is not entirely foreign in our house. I am positive my kids have seen Ben play it before (but not nearly as obsessively as he did in college, tyvm) and have maybe even tried it themselves, but not extensively, by any means. But they got a chance to try it at the fundraiser and liked it (even though, really, a 3yo? Not exactly the best racer skills…), so we’ve played a few family rounds with our own copy of the game since then.

Until this morning when one of them got a freaking wild hair to wake up his (I’m guessing here) siblings and entice them to go downstairs where they raced for an hour and fifteen minutes unawares to their parental units.

I was totally woken up by thumping above my head, but since I don’t (can’t) sleep near a clock, I have no idea what time that was and, at the time, I just assumed it was bathroom breaks (except then no one came down to tell me good morning and after a bunch of tossing and turning I fell back asleep only to be woken up later in the middle of a really weird dream to the news that my children were downstairs helping themselves to video games before the crack of dawn. Awesomeness).

As you can imagine, their behavior and awake factor was wonderful the rest of the day.

Actually, I could already see the ill effects of that much screen time that early in the day before anyone left/went to school, and I honestly considered sending apology notes to their teachers but that would have involved explaining the apparent free-for-all nature of our house and that just didn’t seem like a good idea.

Somehow everyone got through the day without falling asleep (except for the sweet babe who still naps), but the end of the day was not without tears and extra long stalling, because that is what overtired children do best. They also excel at getting up really early instead of sleeping in to recover, so you can bet we are unplugging and hiding the Wii to avoid future such adventures.

For Pete’s sake. Or eff’s. Take your pick.