Maybe this is the Norovirus talking, but it looks like coffee and I may be done. For good.

Shocked? Let me distract you a bit first with a health update before I explain.

Here’s the State of our Union as of Thursday night: better but not great, and certainly not 100%.

As you may know from FB, RL was the last one to fall in the wee early hours of this morning, and she’s had a hard day of it. Actually, she was oddly perky in between bouts of upring, which made it all the harder to get her to rest, but sure enough, just when we thought she was in the clear and could sleep in her own bed tonight, she got sick again and is back on the couch in the living room with me. Currently she is sleeping sitting up against the back of the loveseat; I don’t understand this.

Thankfully the boys are all back in their own beds tonight, but none of them had a totally clear day, either.

HD’s was the best but it wasn’t until just before bedtime that he actually ate anything, so he’s home from school again tomorrow to keep from getting totally depleted (and exposed to anything else just yet, tyvm).

TJ and LT kind of tie for crappy days. After seeming so much better yesterday, Truman was feverish and punky most of today and took in nothing other than breastmilk and some electrolyte liquids from his sippy cup all day long. He took extra long naps, one of which he woke up from sick in his crib, and even took a third nap on me during our late 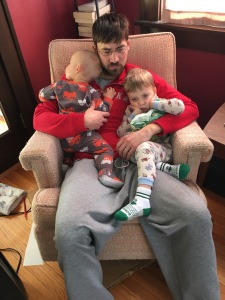 afternoon nursing session. The scariest part was when he went 5+ hours without a wet diaper, but then he started peeing again, so I’m hoping we’re over whatever hump today was for him. Did I mention that when he was awake he did NOT want to be put down? Made for an interesting time of trying to tend to any of the others, so thankfully Ben was home today to recover himself a bit and help with the herd.

LT, after seeming better late Monday and Tuesday, has been backsliding the last two days, so thanks to the knowledge that some other friends have had other illnesses creep in post flu, we took him in to the doc this afternoon and sure enough – the kid has strep. But at least for that we can get meds and get him on the road to mended because wow, he’s been out of it the last 48 hours.

So what does any of this have to do with the apparent end of my love affair with coffee?

Well, obviously yesterday there was no chance in hell of me drinking a cup of coffee. Usually when I get that sick, I also get an awful caffeine withdrawal headache. But yesterday was different in that sense; while I thought of coffee later in the afternoon, I wasn’t hurting for it and I certainly didn’t want it keep me up last night, so I made it to today where even though I didn’t get the same lengthy naps during the day, I had no desire to drink any.

OF COURSE I had a desire to drink coffee today. I am totally addicted to the stuff. But lately I’ve been seeing blogs and articles popping up about not drinking coffee and each one is this little nudge to a thought that’s been in my brain for some time which is this: I don’t really think I should drink coffee.

Why? For a number of reasons.

And the amazing part? No headache again today. So how can I not try to continue this?!

Of course I think it is going to suck. Kicking the habit is going to be hard, for sure. I will miss the smell a ton and the ritual, too, of brewing my single cup (and then another) while

the baby takes his morning nap. But don’t worry, I haven’t gone completely crazy – I am still totally going to be drinking caffeinated tea because, hi, I’m a mom of four active monkeys and I have to stand some chance of keeping up with them. Right now I’m well stocked with Yogi Teas – are there others you would suggest trying?

Oh, and as for the leftover coffee grounds and that mostly full container of creamer (I mean liquid sugar)? Well, I’d offer them up to whoever wants them, but since I doubt anyone wants ANYTHING coming out of our house this week, I am going to experiment with some homemade coffee scrubs and maybe some recipes? Surely there’s a Pinterest pin for that, right?!

One thought on “I’m Breaking Up with Coffee”