Actually, over a week now, but I’ve been meaning to write this post for a few days and sometimes you just can’t get an old BNL song out of your head, so you go with – actual timelines be damned.

One-plus week of/since what? Coffee. Yes, my friends. I am over a week out and still coffee free, if you can believe it.

And truth, other than two times when I was really, really jonesing for it (once, less than half a week in when I finally felt well enough to attempt cleaning the house post-flu and another time this past Thursday when it just sounded so nice), I’ve been good. Never any headaches and no major blow to my energy level from what I can see; and that, I must say, is a complete miracle because the baby decided to have A Week of it in regards to sleep.

Call it walking skills developmental crankiness or potential teeth crankiness or post-flu crankiness…Truman has not been sleeping well at night. But here’s the deal….at 16 months you don’t get to backslide and suddenly not be a sleeper. That’s just not cool, kid. However, this week there have been more nights than not with him not sleeping through the night, which results in him waking everyone else up in the middle of the night and goodness me, we’re all just a bit worn out at this point.

It occurred to me while typing this that perhaps he is napping too long or too well during the day, seeing as he still goes down for both morning and afternoon naps, but I’m also going to pull a big NO! on nixing that because if he drops a nap, I’m screwed for any chance of getting work done during the day which simply won’t fly. We don’t normally keep two naps this long, mind you, but I really am hoping it holds on a bit longer, although certainly  not at the expense of night sleep.

Oh, parenting. You are always so fickle. I mean funny. I mean – well, perhaps another f-something.

So, yes. To have made it through my first week back at CCC (with the same number of classes from last semester but double the students) and through the sleepless shenanigans and still be coffee-free? Well, I’m writing about it because it feels like a bizarre accomplishment of sorts, and thereby worth documenting.

Here are the various goods I’ve been drinking instead (because, remember, I haven’t walked away from caffeine entirely – that would be insane): 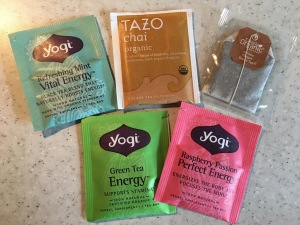 The fruity stuff is not my favorite, and I ordered a chai latte mix because as much as anything, I miss the consistency of what my coffee + creamer/milk combos were.

Speaking of creamer, I totally found something to do with the leftovers: 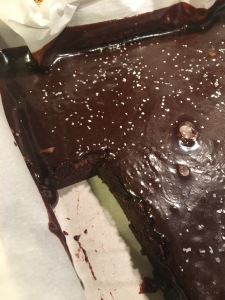 salted caramel fudgy brownies. While they may have made me gain five pounds this week, I don’t care a bit because they were totally phenomenal. Recipe can be found here and is so much worth investing in some coffeemate, butter, and chocolate chips because holy fudge heaven. I mentioned the five extra pounds, right?

So it looks like this is legit. I no longer drink coffee. And I appear to be cool with that, however, I need to maybe unfollow some bits online because all the coffee memes I see make me miss my magic beans. But naw – I love Sweatpants and Coffee too much to remove it.