To say that starting your own business is a lot of work is a gross understatement. To say that starting your own business while also momming for 4 and adjuncting for almost 40 and inadvertently scheduling ALL the social things possible in a 3-week time period is not easy? Yes, also gross. I mean – a gross understatement. Because there’s nothing gross about the work I am doing, on any of these levels, but wow, did everything slam into me this week.

Pick any of those four categories from above and there’s a lot to do. A lot going on. And the problem is, the four categories seem to be pulling at each other a bit, much like siblings who should just sit nicely together on the couch, but instead can’t help digging an elbow or quick pinch or giving some other disturbance to another.

Take today. Today is Thursday. It is meant to be one of my two blissfully quiet-for-almost-two-hours-while-the-baby-naps-in-the-morning mornings that I get each week. This is a time for the adjuncting and the business and for the just being a person to shine. But today, LT woke up with a head too stuffy to send to school (for fear of infecting those around him, more than anything), so there went my hopes of accomplishing much, because even if I give him screen time during nap time, he’s still right there next to me making it hard to work on my marketing plan or website.

But as you all know, our categories aren’t children on a couch and they aren’t created equal. They might be loved equally like children, but there’s no way you can look at your kids and say, would you PLEASE just give me two (nope, I want ten) hours alone so I can THINK and WRITE and DO all the things that need to be done? Parenting just doesn’t work that way.

So instead, I closed the computer, got the baby up from nap, and let the two littlest Littles roam around the kitchen and main floor while I did the dishes and then moved on to a project I have been meaning to do for weeks – thank yous for our friends who helped us during Norovirus Hell 2017.

Because I quit coffee, I had to find something to do with all the left over coffee supplies, so I combined the leftovers with Pinterest and thank yous, coming up with the idea to make coffee scrubs for all those who helped. I finally (finally!) got around to picking up some cute jars yesterday, so this morning – when my hands and brain couldn’t quite work on what they wanted to – I did something else productive and full of love. Incredibly, it was all very, very simple, too! 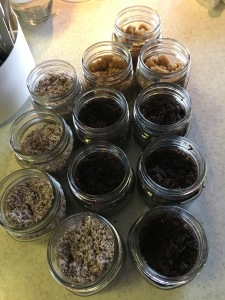 I purchased a twelve-pack of jars and had a few extra thank yous to make for various folks, so I actually made three different scrubs (because not everyone may want the coffee scrub) and landed on these three Pins: 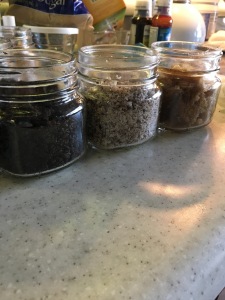 Can you believe that, all while tending to and snack/feeding the wandering children hovering around my legs, all three recipes start-to-in-the-jar took less than an hour and a half? I don’t often trust recipe times online, but I promise you – these were all so simple to do, even in the midst of heavy distraction! 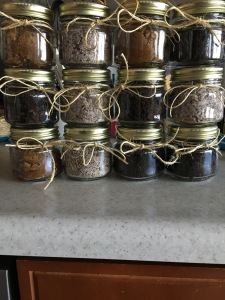 There are still a great number of To Dos on my list and in my brain, but I am glad that this lovely little chore is done. It was easy peasy lemon squeezy, and I hope that those who receive them really know just how much we appreciate their care, concern, love, and support.

As for all that other stuff? Well, I’ll keep plugging along and it all will be done. And not just eventually, but SOON. Because good things are coming! And Water Bringers, your good stuff is coming your way soon also – I hope you enjoy!