Help! I need somebody! (Side note: did you know there is a kids’ cartoon on Netflix that has singing bugs that do covers of Beatles songs? RL loves it and I in turn love hearing her sing their songs at random on afternoons after she watches it.)

Today has been a throw-everything-but-the-kitchen-sink, because – OUCH – at this head cold that has gone out of its mind crazy in the last few days. If you happen to follow the new biz on IG , you’ve perhaps already seen this image, but it is actually just a small representation of the attempts of health-a-fying I’ve done in the last 48 hours: 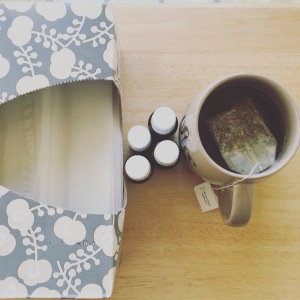 And, whether you follow GS on IG or not, here’s my current view (same song, fifth verse):

I’ve got three pretty fragrant essential oils in that defuser and can’t smell a one. And that’s lemon ginger tea in the mug that I can’t taste. After being so used to uber nose in 2016, it’s really weird not to taste and smell, um, anything.

Thank goodness for my router-rooted nose, though, because without it, I would for sure be headed down the path to a sinus infection. As it is, I’m afraid I’m close, but I’m holding out hope that I can still turn things around and avoid it. Besides the pain and the dr. visit that would entail, I’d also like to avoid one because since sinus surgery, which is darn near 14 months ago, I haven’t had a single sinus infection. I used to have 3-5 in a year, people, so this is actually a pretty big deal in my world.

A couple weeks ago at book club, I believe, some friends were discussing sinus infections (LOL – if you’re not in your 30s yet, look out – you have some thrilling conversations ahead, my friends!) and I almost blurted out my little lucky streak statistic, but decided against doing so because I am highly superstitious and didn’t want to tempt fate with my boastfulness. But then Linky got sick and then the baby got sick (and coughed and snotted in my face and arms for two days straight) and I sort of knew I was germ screwed.

And trust me, where I’m at now is not fun. No yoga since Tuesday, and teaching today, there was noooooo way I could demo anything that involved a forward fold or downward dog because yuck. And ow. But I know it would be so much worse if my nasal passages were still the same old deviated ones, which is why I am holding on for dear life and trying All The Things to keep it from escalating.

Which leads me back to my initial request and bless you if you are still reading this…my research tells me that I should be using Lemon EO and Eucalyptus EO and I HAVE NEITHER in my cupboard (and don’t get my order for a couple-few weeks yet). Does anyone local have some extras I can get tonight?!