And it is a scary, scary place. Actually, for him, I think it is quite fun and entertaining, but from the standpoint of the person mostly responsible in the day-to-day for keeping him from a) hurting himself and b) destroying every blessed thing in sight, we are are struggling.

Am I alone in thinking that with each new stage of independence/mobility, a different side of the personality comes out, too? I have a feeling this will continue all the way through parenthood (i.e. when they start to drive, leave for college, etc.), but it certainly rings true in my world in The Tunnel as of late.

Now that Trumy is officially upright and mobile, and trust me it’s not walking – it’s running – I feel like most of my time spent with him when he’s awake is an even split between feeding him (he’s growing so much lately, it seems) and keeping him from danger. I’ve had friends tell me in the past that their kiddo was a wrecking ball as a toddler and the image always made me chuckle a bit, I thought sympathetically, but nope – I did not truly understand that term until now.

The biggest problem is that what TJ thinks of as danger (nothing) is not the same as what I see as danger (um, everything?). Let me give you some examples:

He LOVES to climb up on anything he can and even when he’s on the floor, he’s got my 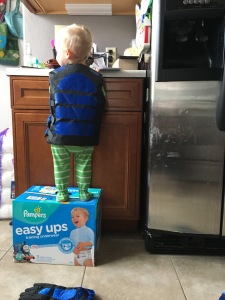 crazy long arms that LOVE to reach up and pull whatever they possibly can from any and all tables and counters and surfaces. This means no ones’ cups or plates are safe if left too close to the edge of the table when he is loose, and don’t get me started on the piles of school papers that he keeps spreading all over the kitchen floor before I get a chance to deal with them.

He LOVES to get into the bathroom where he inevitably sticks his hand in the toilet if someone was forgetful enough to close the lid (*ahem* everyone but me) and also LOVES to get up by the sink to mess around with the sink itself (which, let’s face it, probably isn’t the cleanest spot) and/or the toothbrushes.

He LOVES to throw shit down the laundry chute. In the last month I have found so many toys and books and shoes and food items mixed in with my laundry; while it makes life a bit more interesting when doing the wash, it is less cool when it involves a sibling’s shoe that is MIA before school the next day (or three days later and we still haven’t found the thing).

He LOVES to throw shit in the trash, too. Now, that wouldn’t be such a bad deal if he actually restricted himself to putting trash in the trash, but oh no. A toddler’s mind is not wired that way, and mostly he LOVES to put whatever he wants in there (and sees nothing wrong with trying to retrieve things, either). 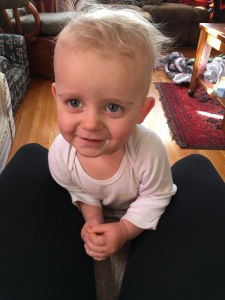 He LOVES to rip things. Dang it. I have always been so lucky in the past when it comes to kids and books, but No.4 is giving me a run for my bibliophile money because he KEEPS. RIPPING. PAGES. No, Baby!

He LOVES cords. And turning off power strips. And basically any other manner of electronic thing he SHOULD NOT BE TOUCHING.

So, OK. I’ll stop there. Not all of that is dangerous, but it does feel very Wrecking Ball-like, and it is wearing me out. Literally. My back and my right shoulder are sore from all the scooping up/retrieving of him that I have to do in any given day to keep him away from these (and other) potential hazards/problems.

Obviously I am thrilled with his walking and his development. And I even don’t mind the mischievous grins on his adorable little face when he’s pulling this crap, at least not most of the time. But I am questioning just how far I can go before this 4th Kid wears me down into the Oh Just Do Whatever You Want Stage.

Considering that he’d ransack the house and hurt himself in the process means that even once I’m there, I still can’t let up on the vigilance.