I tell myself a lot of stories in my head when it comes to asking for help. I’m not good at it. I don’t need to do it; I can handle this myself. If I ask someone for something, I will be in debt to them and feel guilty until I can go above and beyond to repay them. This and so much more runs through my mind when I’m in a tight spot or in need of assistance. Do you ever tell yourself similar stories, maybe surrounding different issues?

Since I came into motherhood, I have had to work on this. A lot. When you don’t live in the same city (or state) as family, and you have Littles, you are inevitably going to need help from others. Sometimes a lot. The concept of a village is no joke, and in the 7 3/4 years (the 3/4 is very important to HD these days) of being a mom, I have been fortunate enough to meet and surround myself with some of the best and most caring helpers out there.

And yet, still, I sometimes don’t know how or when to ask for help.

Yesterday started out as one of them.

In my defense, I did not know what was coming for me yesterday. Now that it’s over, I’m still not entirely sure what came at me, but it turned out to be far more intense than what I anticipated when I got sick before breakfast yesterday.

Since my initial OB appointment, I’ve been taking a little medicine before bed each night to curb the nausea and help me get some sleep. All safe. All doctor approved. Since I’ve been feeling better for the last week and a half and Wednesday marked 13 weeks, I decided that night not to take it because I thought I was past all that.

When I hardly slept, had a raging headache, and then got sick at 7 a.m., I thought otherwise. In fact, I thought I had made a very stupid mistake and was being treated to some really crappy morning sickness in return. Yesterday was HD’s first day of summer vacation (read: my first day with all four kids home) and Ben’s last day of finals, so I knew I just had to suck it up. I was stuck, sick, at home with four kids all day and that was just that.

Except then I continued to get sick. Nothing stayed in my system. By mid-day, I was so wiped out that I knew I was either in the middle of the worst morning sickness flareup EVER or had the stomach flu. But I still didn’t reach out to anyone because Ben was at least able to come for a few minutes to throw lunch at the kids (anyone else use that expression?) and then it was crash time for me and the baby during afternoon nap (which turned into extended screen time for the Big 3 which might have been just as good of a start to summer vacay as if Mom had been upright and functioning). So we were surviving. Mostly.

After Ben got home for good post-testing, I crawled into bed with the computer and reached out to some mamas in town to see if they knew about anything going around that I might have caught. From there, bless their sweet hearts, we parsed my situation and ruled out the morning sickness entirely, and settled somewhere between potential bug and potential food reaction. I was all in favor of diagnosing myself with something that wouldn’t spread to the rest of my family, and by that point in the day I was at least keeping Gatoraid in me for a little bit before getting sick again so I thought things were improving.

And then they went downhill again. Frequency and intensity of sickness increased and had it been just me at stake, I probably would have just toughed it out. But by the afternoon, every time I’d run for the bathroom, I kept thinking about this tiny baby growing in my belly and felt so bad for the wild ride s/he was being given. So after Ben got the kids down for the night, we called the answering service for my OB’s office and got a return call from the doc soon after that. He was very reassuring that Baby was undoubtedly fine, and that it was really just up to me on how I felt on whether or not I should go up to the hospital for fluids. I mean, at that point, I hadn’t kept anything down in over 12 hours for more than 30-45 minutes at a time, and couldn’t remember the last time I peed, so we decided going in was probably a good call.

Not only was it absolutely the best thing to do for my body, it gave me another opportunity to know just how willing my people are to step up when I just ask for help.

With some quick phone calls and later messages, we had people here at the house to hang with the sleeping kiddos, a friend to sit with me at the hospital while Ben ran up to school to get his tests to grade (so he could stay home and take care of me/the kids today), and eventually, thanks to the beauty of social media, lots of well wishes and prayers from all of you as you learned about the day and the situation. And don’t even get me started on the ridiculously awesome care I received at MLH – they always go above and beyond and if I start writing about that, I won’t stop. 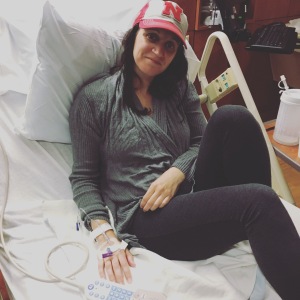 At one point, Ben and I were sitting there in the room, waiting for the fluids to start working their magic (which they totally did, by the way) and I told him I was glad we didn’t decide to wait overnight to see how things went. He looked at me and told me point blank that he was very glad I had come in because he knows how much I tend to push through and that I had already done plenty of that yesterday as it was. That sounds like false humility when I read over it, but it’s also just witness to my stubbornness and my “I don’t need to burden others”ness which he sees.

Which is crap. And I need to keep reminding myself that that story is crap. Of course I need others. Asking them for help is not burdening them; it is allowing them to be part of my life, to be there when I am vulnerable. I very much need all the people who reach out and help, or offer to help, and show that they care. I can be as tough as I want, but I still can’t exist in a vacuum, sick or not. I am very lucky to have such good support and I hope my friends know how much I appreciate them, even when I don’t always reach out to them when I should.

As for the health front…I got to come home at 11:30 last night and crawl into my own bed where I collapsed and thankfully slept without getting sick the rest of the night. I woke up today with a headache that has persisted even now, but have kept down all fluids and dry cereal that I’ve had so far today. I call this a major win, especially compared to yesterday.

Going in was the right call. Asking for help and being willing to take that help was also right. It always is, for all of us.

Your people love you. Let them.

One thought on “Just Ask. And Then Let Them.”