I’ve gone with some quiet periods on the blog before, but I don’t know if ever before so many crickets have chirped here between posts. Since getting sick mid-May, we’ve been in the whirlwind of transition between Ben’s school year and my summer adjuncting, plus house projects, and even though I often have words dancing through my brain and stories waiting to be told, I just have not made time to sit down and get them down on paper (page). But today I have a spare moment and some time to myself, so I’m vowing to get back to it with the writing here and now. What follows may be hodge-podgey and scattered, but so it goes with my brain anyway these days, so why not embrace it, right?

The Monday following my whatever-the-heck-that-was, I started my first ever five-week course at CCC. In summers past, I have always taught three-week sessions, but this was asked of me and I could make it work, so I took on the challenge of leading a dual-course Emporium Lab. Thankfully I did not have to create the course(s) from scratch and once-upon-a-lifetime ago, I did offer self-paced classes as a full-time instructor, but I have never done what I’m doing currently which is to guide students in two classes through their work simultaneously. Actually, some of them are doing one and then the other in the span of five weeks while the rest are signed up for just one of the two.

Have I confused you yet? Yes, I know. It’s unique!

The students spend three and a half hours with me four mornings a week and work through course content, quizzes, and writing assignments at their own pace (which has to be quite regimented for those attempting to complete two courses in this one session). I am there to guide, facilitate, answer questions, respond to writing, give quizzes, and keep everyone on track/target. I thought, going in, that it might be a bit dull on my end since there would be no formal lecture, but holy moly cow. Not dull. Now that we are two weeks in and some are on the verge of finishing all units of their said class while others are still working to wrap up one class in order to move to the next, I see just how wild a lab like this can be.

I feel like someone is constantly calling out “SQUIRREL!” at me, not because the students are bothersome (I’ve been off from summer teaching for a bit and I forgot just how much I appreciate summer students and their dedication), but because someone is constantly doing something different or needing something else than the person next to them, and I spend my mornings trying to keep it and them all flowing smoothly. For the most part, I think it is, and I appreciate the focus and attention this group has brought to their mornings with me.

After I get home for the afternoon, I’m pretty well shot and most days have to throw lunch at myself and then rest for a bit. That doesn’t exactly help with productivity around the house, but B and I have saved that for the evenings as we decided to – finally, after 5+ of being in the house and me wanting to change it all that time – paint our giant, pink-ish living room. Baby No.5 has actually inspired several house projects to make our space even more functional for our crew and painting was a precursor to making those other things happen. I’ll be sure to do a post soon with more detail on all that has happened thus far and other plans to come, but for now I’ll share a few pictures so you can see some of the transformation. 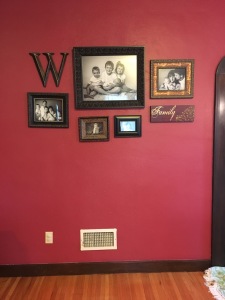 The painting process was a little scary, not to mention strung out over almost a handful of days because, hi – it’s not easy to paint with this many little Littles in the house (at least not when they are awake), but we got it done (save for the top edge of the room) and I really like the end result.

Other reasons for not writing in the evenings these last two and a half weeks? Well, for

one, we started allowing Harrison to stay up later than the other kids, during which time he and I read together. This is lovely and he’s so darn excited about it but I have to say, it has cut into some of my own personal time in the evening and I legit feel that in my energy level. That doesn’t mean I would trade our new little routine for anything, but I’ve got to be mindful of not letting the tiredness that creeps in during 50+ minutes of extra reading with him totally wipe out the rest of my nights. I’ve recently reactivated my YogaGlo account and am very much dedicated to practicing for myself and this growing babe at least once a week, no matter how long the days seem (another soon-to-come post, I’m sure).

The final two culprits? Books and Netflix. I finished only one book in April (hello morning sickness and end-of-school year rush), but I more than made up for it in May by completing seven titles (two of which I started in April, mind you). And then Netflix decided to drop new seasons of all our favorite original series of theirs plus Hulu has The Handmaid’s Tale and yeah…..more “TV” for me in last three weeks than the previous three months, I bet (and we still haven’t even touched two of our faves on Netflix).

So there ya have it: life as a busy mama who is growing a babe and a business while teaching and momming and still trying to be a person with actual interests pertaining to self. It’s a wild and wonderful ride and even when I don’t always record all the details, I’m still happy to come back to this space and reflect on just how we fill our days, hearts, and minds.