For the last week, our house has been in attempted healing mode. I’m not entirely sure how well our efforts have been going if we’re still at it a week later.

For me, that means my knees. After taking a tumble on a concrete driveway last Wednesday, it took several days just for the injuries to scab over, much less really start healing. While one is definitely closer to fine than the other, I still can’t put hardly any pressure on them (I can at least bend them enough to squat down to kid level though), and, like most injuries, you just don’t realize how many times in your daily life with Littles that you put weight on your knees until your knees tell you NO.

My discomfort, however, has taken a backseat to the health mystery of Mr. Harrison who has had an incredibly strange seven days/beginning of his school year. I’m no math teacher, so this could be wrong, but at this point he has darn near missed as many days as he has attended (one of those was our own doing with our Eclipse Day).

The culprit for the rest of them? Fever. One that showed up last Wednesday afternoon when I picked him up from school, then spiked on Thursday night (and resulted in couch sleeping shifts for B and I that night), and then persisted at various levels the whole weekend. Of course we kept him home on Monday but ended up not at the doctor because the fever went down (I had my own doctor’s appointments for Baby No.5 that day, so we still had familial representation at the medical park), to the point that he was then good to go to school Tuesday. But then the fever showed up again, low-grade, last night and was still there, low-grade, this morning. So. Another day home, but this time for sure to the doctor.

I should mention that we also did a trip to convenient care on Saturday where they did test him for strep, which was negative, but you know how sometimes you can just look at your kid and know something is still not right? That has been the last five days with HD.

So this morning, another strep test and a finger poke to check blood counts and whatnot. Everything came back – again – negative. But you can tell something is wrong just by looking at him, much less by peering in his throat, so we’re thinking the medical mystery is a virus last week that broke Monday but then resurfaced as a secondary infection yesterday. So meds it is, as many fluids as we can get in him (unfortunately the child got his father’s hydration habits and not mine, so this is a challenge unto itself), and hopefully back to school ASAP.

From a parenting standpoint, this has made the last week, um, challenging. Next to nothing has been normal, and even though I am not teaching for CCC, I am still working via Grounded Sky and coordinating not only a big event for September, but also still teaching yoga classes of various styles. Plus, hello Third Trimester with Baby No. 5. I feel like that should be explanation enough as to why things have been less than smooth these last seven days.

So wth does this have to do with a camel and pretzels?

Today, after getting home with all three boys from preschool pickup, after spending much of the morning at the doctor’s office/pharmacy with two of them, in a span of two minutes, the 4yo managed to lock me out of the house and then then 2yo (once I was back in the house), dumped an entire bag of football shaped pretzels all over the dining room. Normally those aren’t really things that would make a person lose their shit, but I lost my shit. Which really means, I yelled and stomped around the kitchen a bit, and was just generally a big old mess of human because my patience and nerves (and knees, because ouch – literal salt in the wounds trying to clean up the pretzel mess) are shot.

And, clearly, I desperately need some normal, because so far, we are two weeks into the school year and I still haven’t found what that means for us yet. So with our window for establishing a routine being so short before we upturn everything again, I’m not terribly surprised that locked doors and pretzels were enough to tip me over the edge today.

Humanness + tunnel of parenthood + recovery mode pretty much = I need a nap, lots of coffee, just a teensy bit of normalcy, and no more damn pretzels. 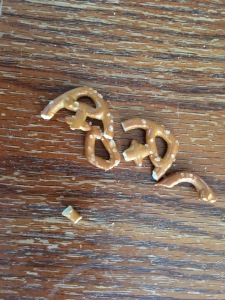