Sometimes with Littles, changes are gradual and you don’t even notice until weeks later that they are demonstrating some new skill or wearing capris that once where definitely pants. And then other times, kiddos can seemingly overnight do something that draws your attention and makes you go, “Whoa! Where did you come from, child?!”

I had one of those switch flipped moments with Lincoln this week and as baffled as I am, I am also happy for him and pleased to see this kind of growth in him.

If you know LT via the blog or my stories, you know him more as I know him…a loveable, athletic, uber independent, little spitfire. If you also/only know him in person, unless you are around him a LOT, you might see glimpses of these things, but mostly he has always been far more reserved and withdrawn with others outside of our family.

Case in point? We have been tossing around the idea of having him evaluated for speech and when I discussed it with his teacher so she could keep an ear out for any indicators, she (unsurprisingly) agreed but also said (unsurprisingly), “But he doesn’t really say much at school.”

Then yesterday happened and we met for the first time a new sitter who is going to help me out occasionally this year and my kid who is normally hiding behind my legs (& will probably continue to do that, btw) was an animated goof the whole time she was at the house….talking, running around, kind of a wild man (way to show the sitter what she’s in for, kid!) goof! It was really fascinating to see.

And then today? More confirmation of a change and some growth. We attended our first Toddler Art in over two years (birth of and subsequent year of napping Truman + Tuesday preK last year kept us away) and Lincoln was totally into it. He was pumped to go, and he participated by singing and volunteering answers to questions (this was the part that made my heart swell a bit). Again – fascinating and so, so cool to witness. 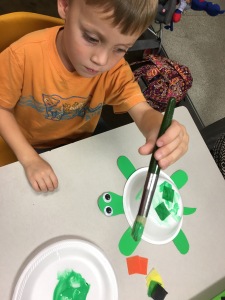 The most fitting part of today? The art theme was turtles and I couldn’t help but think I was literally observing my own kid come out of his shell a bit while we were there. Not that there has ever been anything wrong with him or that I’ve been waiting or pushing for this, but I still love that he’s willing and able to put himself out there more than ever.

Plus, I have been telling friends for years that when this kid does come out of his shell to watch out, world, because there will be no stopping him. Looks like we might just be at the start of a very grand new adventure!!