In the last eight sleeps, only two have not involved being up for hours in the middle of the wee early night/morning. Each one of these disjointed sleeps eventually included a short “nap” before the rest of the house woke for the day, but I am here today to admit how much I am struggling as a result of all this and just how relative that lurking darkness in the seemingly fine, bright clouds in the sky feels to me. 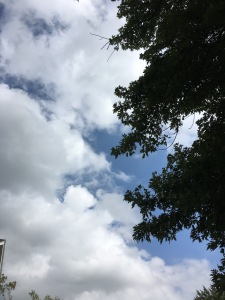 Zombie jokes don’t even begin to describe the dark and ragey place my overtired but brain now seems to live. And while this is not new territory for me, especially this late in pregnancy, it is certainly unwelcome as it is making normal existence as a functional human being difficult, much less the challenge it is adding to parenting. Anything and everything my crew decides to throw at me right now feels huge and heavy and fit-inducing, for both them and me.

Like someone who learned (where? how? WHY?) the phrase, “Bye, Stupid!”

Like another someone who insists on sitting on my head as I try to take a PBS nap on the family room couch.

Like all the sass and attitude that I might normally be able to deflect or redirect, but that suddenly feels personal and like the epitome of reflection of how much I am sucking right now.

It’s all of these things and a dozen other little bumps in any given day that I’m not handling well. At all. I’m mad. I’m sad. I’m yelling. I’m crying. I’m the stereotypical wrung out mom (to-be) and the crap part is, I have absolutely no idea what I can do to turn it around, because try as I may have in the last 8+ years of baby growing, I still haven’t found the magic cure for taming the hormones that will 1) bring rest in order to 2) bring peace.

Now, I know that part of today’s particular struggles (that list from above? Yeah, that could be any given day in the last week-ish, but it was all this morning before noon) have been compounded not only by the lack of sleep but the excess of activity. I had a HUGE weekend with two major work events and a book club and normal church activities Sunday morning, and while that’s all good stuff, it meant I was moving from one to the next to the next to the next, fueled on adrenaline, coffee, and a Sunday afternoon power nap that I’m sure I should have been doing something productive around the house during, but AYFKM? My body and brain are SO. BEHIND.

Also not so helpful? Ben has conferences tonight, so after a not-great morning, I’m in charge of nighttime stuff that is normally not “mine” and I’m basically using this screen-time post-writing opportunity to officially offer a wild-flung hope and prayer that we all make it through without more yelling or more tears, from any of the parties involved. That actually sounds like I am asking for a miracle, but I guess a mama can dream, even if she can’t sleep.

And the moral of this post? Yep, there’s not one. Other than to say, for honesty’s sake, that Baby No.5 has landed me in the not-sleeping place far, FAR sooner than I would have liked and that, too, is worth documenting, in all of it’s weepy, very un-shiny glory because I know no mama alone, but the other worn-the-eff-out mamas need to know it, too: I see your dark circles, friend, and I know just how uneasily they are earned.