Day 12. And while it feels like we’ve been on a bit of standstill since Day 7 or 8ish, I suppose that’s not really true. We’ve more so been in the backward-forward/up-down Dance of Progress that is life in the NICU and allllll of it centers on feeding.

Here’s the latest: Wilson is still trying to wake up enough during feedings to get as much as possible from me or from the bottle (which is what she is taking overnight), and that, my friends, feels like it is taking forever to see any progress. She is sooooo sleepy during feeds, even though we’ve been trying to increase our holding/snuggle time with her between such so she will sleep then and not when she should be eating. Basically, she’s a big old snuggle bug which is a lovely thing except when that applies to eating and eating applies to going home.

The way it has worked the last few days (bless it for a tiny bit of consistency) is she gets 30 minutes to eat on her own and then whatever she doesn’t get from boob or bottle (we weigh her before and after on nursing sessions, just like Baby Weighs at home, to know how much she is getting there) is topped off by the NG tube. As of today, Monday, she is up to 75 mls total, so 2.5 oz of milk every 3 hours.

The great news is, her “new” digestive track is handling all of this with total #WonderWilson status. Her poos and pees have been spot on and regular, and actually her tummy in general has been great because she’s had very, very little spit-ups, too, even though we have been steadily upping the ml total each day. All of this is both remarkable and positive.

However, of that 75, at best she’s taken 24 from me and 30 from the bottle, so clearly we still have a ways to go before the NG can come out (and we can come home).

Enter our midday feeding and Back Up in two forms.

The Lactation Consultants have already been in to see us a handful of times since we’ve been here and they were thankfully back today at the exact same nursing session as the Feeding Specialist who came by to help us learn more about how to read a newborn like Willa’s subtle cues during a feed. What we thought was just “sleepiness” is actually more so a response to the stress of not just learning to eat (she’s actually got the whole latch/mouth/breathing thing going pretty well) but post-surgery recovery in regards to her gut and what it can handle.

Folks did warn us that “Gut Kids” tend to very much do their own thing after surgery and that’s definitely been the case for us these last few days. So by having all three people here at the same time to watch Wilson eat and tell us more about what they were seeing helped me learn that by giving her a little space/time and maybe a position change when she seemed to fall asleep (which is actually more a stress shut down), she was able to recover, regroup, and then go again for a bit more during our allotted 30 minutes.

And guess what Little Miss Wonder did?!

She had her best feed on me to date!

We all laughed with delight and shock when we put her back on the scale and saw that she had pulled over a whole ounce from me (32 mls)! We also decided that she must be missing the chaos from home that she was so used to hearing from the womb because it took a room full of people talking for her to relax and get after it. 😉

But seriously. I was so proud of her and also relieved at the support that I received during that session. When they started talking about feeding specialists and such over the weekend, I got worried (and started telling stories in my head) about being told I was doing something wrong or that I wouldn’t be able to get enough in Willa on my own (even though everyone here has been very much aware and very much supportive of our desire to be exclusively breastfed at some point/ASAP and I clearly have a dairy’s worth of milk supply). But not once was I approached as though I was doing something wrong or that she was either; it’s more so just another facet of patience and giving Wilson and her tummy the legit time they need to adjust to her new system and eating on her own and what we can do to best facilitate that.

Best of all? Since 30 mls has been a goal of mine for a few days now, we celebrated with our matching Mama/Baby Wonder Woman hats handmade for us by a friend in Hastings because Heck Yeah, Little Lady – it may not happen on every feed from here on out, but once is a start and a huge step in the right direction of home!! 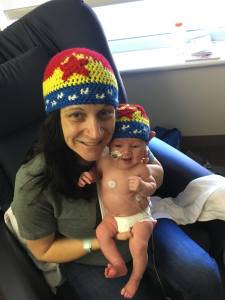