This summer, as one of my dearest friends and I drove back from Colorado (and I heaved the whole way home thanks to pregnancy-induced altitude sickness), we started joking at one point (because, yes, even six hours of being sick in a car can still have moments of light-heartedness, apparently) that the sweet babe growing in my belly was going to 1) be a girl 2) come out with a fist raised in the air and 3) be singing Nahko songs.

If this is all very confusing to you, let me clarify.

We were just coming back from a two-night weekend of performances by one of our favorites, Nahko and Medicine for the People, and even though I was still less than 20 weeks at that point, during the concerts I could very VERY much feel the baby moving around and responding to the music at each show. Nahko’s music is very socially and spiritually conscious which explains the arm lifted in resistance bit, and as for the gender prediction? Well, I can’t remember that part of the conversation now, but I’m sure we had some good reason for thinking it at the time.

When I told all this to another yogini/Nahko-loving friend the first week we were in Omaha, she responded, “That was no joke – that was a vision.” and I have to say I’m pretty sure she was right because Wilson very much came out as a peaceful warrior and has been keeping her hand high, fighting her way through SO much in these earliest days of her life’s story.

Perhaps it is fitting, then, that the very first Nahko song I played for sweet Willa is a new 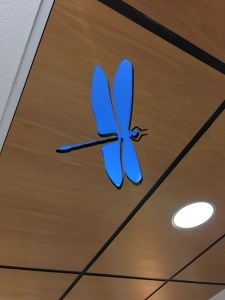 one of his called “Dragonfly” (oh my, did she hear this song a TON from my belly this fall because I loved it AND my own spirit “animal” is in fact the dragonfly, which just happens to be part of the decor in our part of the hospital) in which the main message sings simply, “This is resistance, I’ll survive. I’ll survive. I’ll survive. This is resistance.” Maybe we listened to that song so much in September-November because it would need to be on repeat in my (and her) brain during this wild ride of plane rides and abdominal surgery and recovery and learning to feed that has been the whirlwind of our NICU experience.

Because resist (or rather, persist) we have and survive we will, and today we got to hear for the first time what actually needs to happen in order for us to start talking about the h-word so we can put all this behind us. And while it’s still a mountain to climb, she’s already made great progress up it this week.

Essentially, we have to get to the point where Wilson is taking 80-90% of her feeding amount independently (from me/the bottle). Her amount will still increase by 5mls here at some point, but that is nothing like the moving benchmark (from 40-70) we experienced last week/over the weekend. Right now we’re averaging 50-60% of her amount (which is awesome!), so that gives you some idea of where we stand there. After we hit/maintain that goal, the NG tube will come out and we’ve got to have at least a couple solid days of feeding solo-solo in order for the magic word “discharge” to bring about the uber-magic word “home.”

So this is still very much a process and it’s not going to happen overnight. There still could be “bad” days or “bad” feeds. But we feel like we might be closer than ever to her taking off and us all coming home which has obviously been the end goal since before the start of the whole roller coaster ride, so we will take it. We will resist the obstacles. And we will survive (with peaceful warrior “fists” raised high, just like our Wilson Ann came to teach us to do).