I don’t know if it is more of a physical or personality resemblance, but I have long thought that of all my kids, Lincoln is our Little Ben. There is just something about those two that makes them seem awfully similar to one another, so why not write about LT on B’s bday? 😉

One indicator that Linky is his Daddy’s boy? I can already see that Lincoln, should he one day decide to embark on such, is going to be a terrific daddy himself! For real, this kid loves babies, which I didn’t quite put together until after Wilson got home from Omaha.

It was clear that Lincoln loved Baby Truman, too, but I thought that was more of a toddler thing perhaps. LT was 2 and change when TJ was born, and whenever Lincoln was having a fit or was upset, his go-to way to self-soothe was to run to Truman and hug him. It was sweet but I didn’t know just how characteristic it was of Lincoln until this time around with a new baby when by far the things I hear him say the most are:

“Ooooo, I just can’t stop hugging her, Mama!”
“She is so adorable. She is so huggable!”

And, “Where’s Wilson? I need to give her a hug!” (not much guessing involved to determine his Love Language, eh?) 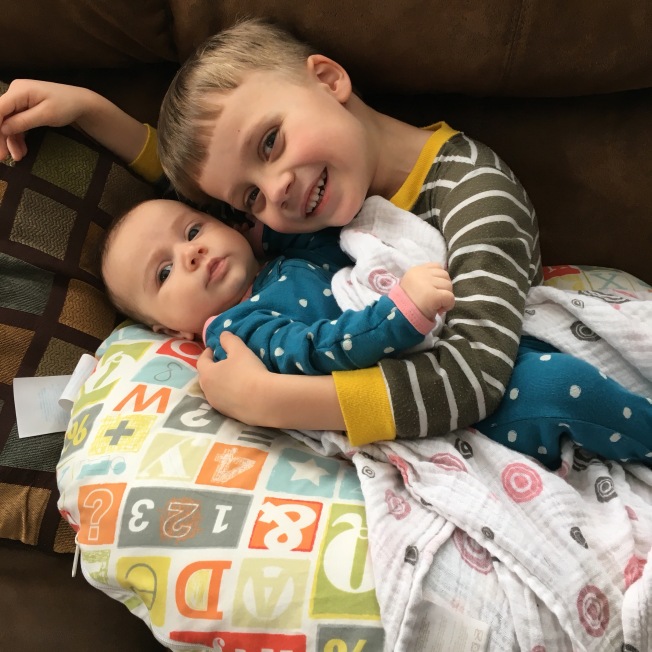 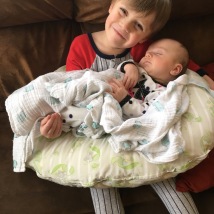 Take this morning, for example, when Ben and Lincoln were getting ready for school (and a longer than normal day for Lincoln away from the house). Lincoln could not head out the door until he’d figured out where Wilson was hanging out so he could, you guessed it, give her a big hug and snuggle.

Holding her, helping me get things for her, talking to her during Tummy Time…all of these are Lincoln’s super skills right now and it is so sweet to observe. As if this girl didn’t already have a bunch of Super Fans! Clearly she’s got a No.1 champion in her No.2 big brother.

There is a LOT to be said about the Effing Fours (which we are thankfully seeing less and less of now that we’ve crossed over the 4.5 mark), but some bits of four are absolutely fabulous, including how big, soft, and huggable their hearts make them.