Seeing as it has been the fastest-but-longest month (winter) E.V.E.R., it’s both impossible and totally reasonable that we are now in the final days of April. Oh, April. You’ve challenged me before and you’ve challenged me once again. I don’t know why we have this beef, but it seems that every couple years, you come with…..lessons. I really can’t believe how quickly the month has gone but looking back it was also a pretty damn hard month, so I’m not exactly sad to see it go.

It started with the stomach bug that knocked me out at Easter, the very first of the month, and it’s continuing here, four weeks later in the form of continued boob drama. What started as a bleb in one breast and then shifted to a clogged duct in the other then turned into a bleb in the super sore boob and now remains as two just generally cranky boobs. You’d think we just started nursing instead of being five months in based on how I feel and I have zero explanations for it.

I’ve had Wilson’s mouth checked and there’s no sign of a tongue tie or teeth or thrush (thank goodness to all three of those things) but there’s also no clear indicator as to why her latch is what it is (kinda crappy, kinda leaky at times) or why my nipples are so sore. It just is and I just am.

So we wait it out. Give her time to grow and maybe time for me to heal, and we see what happens. 12 months remains the goal and Lord in Heaven, I may have to be VERY stubborn to make that happen based on how things are right now, but I worked hard enough to get her going in the first place to be able to come home 100% breastfed, so I suppose I can somehow get there. Right? Right.

The other “this” that needs to/shall also pass is a different kind of stuckness (nope, not a word), and it has to do with my physical routines.

I don’t have a set time post-baby where I suddenly start working out again, 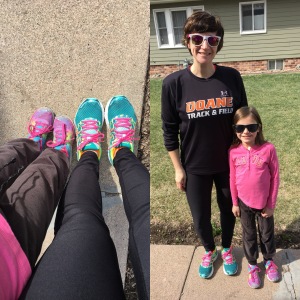 but around this time the baby tends to get big enough to start straining my back as I carry the car seat (or just the baby in general), which prompts me to start doing more yoga, etc. to strengthen my body. This go-round I had not only the desire to yoga again but also to RUN which I haven’t done seriously since before children; but I couldn’t get it out of my head, so instead I just went for it. And by it, I mean a run – with Raegain and then Lincoln – and it was great. I logged less than a mile total and there was definitely some walking in the midst of that running, but I was excited to baby step my way back in to what once was a big part of my life.

However, right when my legs stopped being crampy from the yoga + running, my boob/side exploded in soreness from the clogged duct and alllllllllll the nursing resources out there say rest, take it easy, go slow when you’re having these problems, and so. Here I am. Taking it slow which looks and feels a lot like still doing nothing. But that’s not really true, is it? Because if you’re anything like me, you know that sitting in stillness is very much not nothing, nor is it easy.

So no big physical practice for me right now. On the mat or on the streets. Instead I’m committing to Legs up the Wall and a meditation/mantra of being healthy and whole and that’s it. It’s not exactly what I wanted to be doing right now but it is what my system is clearly, loudly, painfully telling me I need.

It won’t always be like this. In a year’s time, in a month’s time, everything will be different, and I’m much closer to having my body be entirely my own again than I have been in almost a decade, so there’s that to consider, too. Time will pass. Circumstances will change. Focus will shift. For now I’ve got to stay the quiet course and that’s just going to have to be OK for as long as time says it needs.