When I was in college, I spent a semester in Africa traveling and logging many, many miles – from Dar es Salaam, Tanzania all the way to Cape Town, South Africa to be exact. Along that journey, we encountered many literal roadblocks, but one memory that will always stick with me is of coming upon road construction in which the sign read “Deviation” instead of “Detour.” It felt like such an excellent word choice because sometimes when your path goes off the rails against your control, the whole experience does feel a bit deviant.

Case in point? Home reno. We’ve spent this entire summer on a deviation thanks to the driveway and the roof/exterior of the house. In fact, come Tuesday, the roof and metal wrapping and sealing and wood replacement and all that shit will hit the one month mark on all its own. Like most aspects of life, there are multiple reasons for this, which I’d be more than happy to explain in a private message or in-person conversation, but I’m pretty sure we can all agree that that is just too long, especially when for at least half of that time, a giant trailer has been parked in my driveway and big old machines and tools have been stored in my garage. This means we can’t clean up the yard and just let the kids out to play, must less the sanity-losing that goes into such a drawn out process. 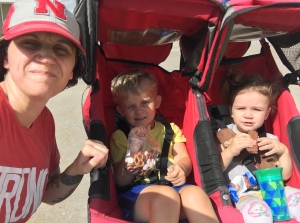 I was so at the end of my rope with the not-finishing/not-moving of things yesterday that I loaded up the baby in the double jogger stroller and pushed her a mile to the YMCA to pick up Trumy from Prek and then pushed them both the mile back, in a mad dash attempt to walk it out, but even all that in the hot midday sun barely burned off my mad and crazy.

Then, miraculously, enough of the stuff got done by sundown last night that the trailer and the tools disappeared, leaving us with the possibility of starting Operation Garage Clean Up. ‘Cuz, did y’all know that when your structure has three layers of shingles on it, but no plywood under those layers, and all that gets scraped off, it leaves a giant freaking mess all over everything underneath it? Neither did I, but it might just be the worst mess to date of this reno and that is freaking saying something.

So this afternoon, after we survived (and even enjoyed) our first Soccer Saturday with

three kids playing and us coaching two of the teams in a Triple Header Extravaganza, we set to work on getting everything out of the garage (so it all could be cleaned) so we could clean the actual garage (so we could then put everything back in it).

I got out there first and noticed pretty quickly that it wasn’t just shingle and tar-dust coating everything but also like real chunks of splintered wood and even old nails and staples and all kinds of crap. When Ben came out to join me, I warned him and told him I was trying to sweep it all up so we could get rid of it safely because popped tires and poked feet have been my biggest fears for the last four weeks.

And with good reason, because not ten minutes in to my husband helping me, he somehow flipped a nail up with his Keen that caught the back of his heal and, you guessed it, ended up sending him to get a tetanus shot instead of cleaning with me. Ironically, the last one he had was in 2008 when we traveled with a Doane alumni trip to Africa.

So yes, deviations in many forms continue to crop up in the process, and with one more room left to go in the basement, we’re still not back on the road of just living in our house in peace and quiet (y’all know that it’s rarely quiet here, right? That’s just a metaphor or pipe dream or something.) which after 10 months of this feels like a foreign concept indeed. I know we’ll get back to that path eventually, but after how much more deviation is a big old guessing game.