A month ago a friend posed a question to a group of us asking about what kind of movement we were doing that felt good and wasn’t a slippery slope into competitiveness. Now granted, the rest of us all happened to also be yoga teachers, but I think each of us has realized over the years that an asana practice is not the only way, and part of why my friend’s question struck such a chord with me is that the physical yoga I have been doing, especially since the start of the pandemic, hasn’t quite been the right combination to “burn off the crazy” as I like to put it.

That conversation sparked a commitment in myself to start doing something that might in fact counter all that. And while I’ve tried in the past to commit to a regular habit of walking (maybe I’ll get back to running someday but now is not that time), this time it seems to have stuck.

For the last four weeks, I have walked at least one mile or 20-30 minutes each and every day. There were a couple days where I did 20 minutes on the elliptical instead, but thanks to it being spring and the weather mostly cooperating (I have walked in the rain a couple times), I’ve been finding all different times of day and places to walk without fail ever since my friends and I had that (virtual) chat.

A few observations about the establishment of this pattern: 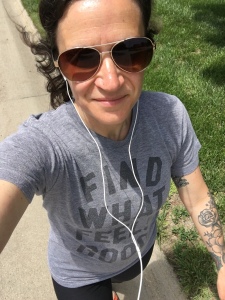 And while I know a million little things could change at any minute, I’m glad that I’ve made this change and have been able to stick with it for this long. I hope that as the summer unfolds, I can keep it up, which will make it easier to transition it into an inside task later in the year. Because right now it does indeed feel good and finding something that does that every day is a huge benefit and blessing.

One thought on “Walk This Way”