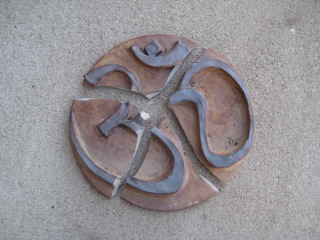 In March, Ben’s cousin Ember gave me a piece from her ceramics class that she (rightly) thought I might appreciate. This July, after a successful transplant from the back to front yard, I placed my Om plate on the rocks surrounding our rose bush. Today, as I sat reading the paper on the front porch while Harrison played on the steps and grass nearby, I suddenly heard a rustling from the rock/rose bed. I looked up just in time to see him carrying the plate, headed straight for the sidewalk where he promptly, after looking at me over his shoulder first, dropped it.

“Broken? Broken!” is what he said. Somehow, I managed not to say much, even though some choice words went through my mind. I guess the power of the Om was with me as I calmly collected the pieces and hauled HD’s troublesomeness back in the house. I will say, however, I was less than pleased with him for the remainder of the morning. As much as I’d like to think that it was an accident, and perhaps it was just a lesson in cause and effect, my feelings were hurt by his actions. During this trying week with him, the irony of this broken symbol is not lost on me. Good thing I still have the one on my wrist to remind me to breathe….