To be perfectly honest, I did not have any thoughts, whatsoever, about who Baby No.5 resembled at our 20 week ultrasound. How can you really tell in those space-agey images if a kiddo looks like another kiddo or one of you two? I figured that arms up by the face (which pretty much all of our ultrasounds have looked like) was enough proof of being a Little Welschie and left it at that. 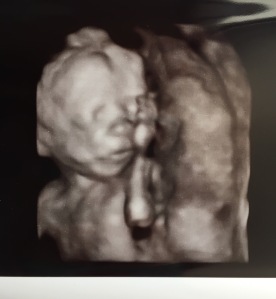 And then I got a text from one of my dearest friends after she saw the image on FB that said, “That picture is SO Lincoln!” and when I went to look at it again, holy moly cow, I saw that she was SO right. Now I can’t see anything but Baby Lincoln’s little face and it is entertaining to think that our babe who did not resemble the others when born might end up with a little twin in November. In fact, I love it.

I mention all of this because I have actually been struggling a lot in the last couple weeks and the last time I remember being this constantly angry and discontent was the time April tried to do us in, the spring I was pregnant with – you got it – Lincoln. Do some of you remember the birth that month of Captain Cranky Pants? It’s a name I’ve come back to a time or four over the years, but I honestly don’t think it’s been quite so accurate of a connection until now. Because, whoa. Everything and everything is irritating the crap out of me these days.

The real culprit? Probably not a shocker, but my guess is sleep. The 4th of July put us behind and it’s not like I’ve ever really been ahead since, oh, mid-March, so I know I’m a very tired, fairly pregnant mama and I’m just not handling (any)things very well.

What occurred to me, beyond the CCP connection, relates back to something my OB said at my last appointment – the same one where that very image was captured by the ultrasound machine. We were talking about my going back to CO this month (sadly, I opted out because it was one thing I could take off my schedule, even if I didn’t want to, and the risk of another setback was just too much for me to take on, even if medically speaking, going wouldn’t have been an inherent risk for either myself or the baby) and I mentioned that I’m just so much more tired and worn down this time around, which led to her response of, “Yeah, you haven’t had an easy go of it with this one.”

Of course my immediate response was, “Oh, it hasn’t been that bad.” because tough as it’s been, I wouldn’t call this a bad pregnancy. But that’s not what she was calling it either. It’s not bad. But it certainly hasn’t been smooth sailing, and that’s where the still-behind-on-energy-and-appetite feeling, even at 21 weeks, comes into play.

The last time I heard her say something like that? Well, I tried to find it on the blog archives to verify and couldn’t, but I am pretty darn sure that she said something very similar during Linky’s pregnancy which was, yes, not easy. And then, as it did now, it took me a while for the reality to sink that if my obstetrician is pointing out the difficulty of my experience, perhaps it would be OK for me to acknowledge and accept that for what it is. And then, perhaps I could cut myself a wee bit of slack with the guilt over being a raging crank momster (error intended) and instead focus on doing what I can to get back to feeling good again.

Honestly, it might take some time. It might take 1,000 baby steps. It might take acknowledging and accepting that this too may just be a season in the tunnel that I have to ride out, because eventually this sweet Little Lincoln-clone is going to join us earth side and while I probably won’t sleep much in the immediate after (is it wrong if I start having daily convos with the bump promising favoritism if s/he comes out as our best sleeper ever? yeah? it is? darn.), someday I will again be rested and able to carve out a space for myself in our family of seven. And while I know that no human can be expected to never have some CCP flareups, I also know that eventually – whether it is tomorrow or next July – mine can be fewer and farther between, and far less cranky in general.

And in the meantime, I can be far less hard on myself for having (and seeing it as such) a hard time.

P.S. Just in case more evidence was needed…it was after Lincoln was born that I reached the point of starting therapy which lead to yoga and breakthroughs and all the work that I have spent the last four years doing to better take care of myself mentally, so again, no shocker here that his little buddy is putting those same tasks directly in my face again. And just as with Lincoln, I’ll be forever grateful for the nudge to do so.

One thought on “Little Lincoln?”