Is anyone else out there still counting days since all this madness started? Did you let that go when school ended or your local government started loosening restrictions?

For us, well, we’re still counting because until school starts again or life semi-sort-of-in-some-small-way resembles “normal,” it seems worth remembering that we’ve been at this for a long freaking time and that it. is. not. normal. And for the most part, we’re not yet moving through the world as if it is.

By our count, which stems from the day the kids went on an already scheduled long weekend break in March and then never went back, Friday marked 100 days of Quarantine Life. 100. DAYS. That is a gross number in this context. It is a sad and frustrating and disheartening number. It is also a privileged and lucky number because our jobs and our situation have allowed us to reach that point where thankfully we’ve been able to be in our house (not an apartment) and have a yard and neighborhood (not a city metropolis) in which to get fresh air every day, too.

But also, gross. And super hard because of what I’ve started calling “the relentless togetherness.” Life with just us and no outside interaction or distraction that doesn’t come in the form of a screen has been incredibly hard on my not-so-little crew. And, let’s be real, on me.

To lighten that a bit, we’ve been trying to find some and new and creative ways to pass the time. Last weekend each kid got to see exactly one friend in an outdoor setting for a bit of actual face time; while it definitely helped, we’re back in home mode so we can hopefully see some family sooner than later because that lack has been so challenging throughout all of this. But we are not down for big interactions, indoor or outdoor at this point, for us or the kids, family or not.

We have, however, returned to B making occasional trips to the local grocery store (in his mask and with a short list) instead of relying only on grocery pick ups and deliveries which meant we “celebrated” (that is so the wrong word; “marked” or “documented” 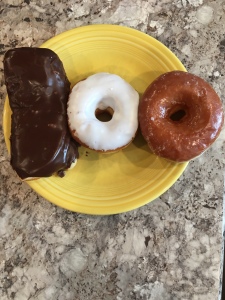 would be better) 100 Days by getting our favorite Russ’s donuts yesterday morning so we could “write out” and then devour, the number 100. The children would have very much liked us to BUY 100 donuts and deliver to friends, but we drew the line at that and kept the sugar overload to just our house.

What we won’t be able to keep just house-bound, before too long, are the great quantities of God’s eyes that the Big 3 have started making. RL was working on a different yarn/straw weaving craft that her teacher shared with her via YouTube this spring which sparked my memory and love of making God’s eyes as a kid at VBS and church camp. Oh. Man. So many memories and so much love. I found some sticks and stole some of RL’s yarn and discovered that that craft is like riding a bike and even after close to 20 years since I last made one, I’ve still got it! AND I’ve still got the counselor skills in me because I was able to teach the Big 3 how to do it with very little drama (and even left-handed in one case). 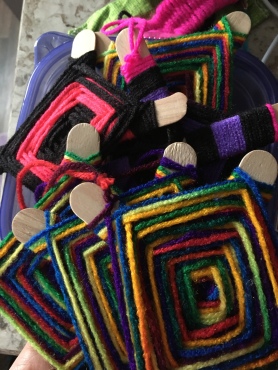 So, all of this is to say, we’re still here. We’re still doing this. We’re still taking things as seriously as we can while also trying, in some ways, to step back in to the world in small, mindful ways. None of this is fun (except making yarn crafts with my kids; that’s been pretty awesome).